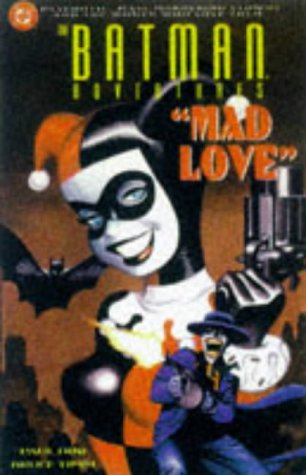 DC Comics Batman Adventures Graphic Comic Book Novel - Mad Love. Brand New Shop Stock Room Find. Released by DC Comics in 1994 this fantastic graphic comic book novel features psychotic, mass murdering clowns and the women who love them. Mad Love is an action packed story that reveals the origins of Harley Quinn as she proves her love to the Joker by trying to eliminate the Dark Knight on her own. Comes bagged and boarded. Brand New Shop Stock Room Find. It was discovered in the store room of a closing down toy and comic shop, with a whole host of other items from a similar era. All Orders Received before 4.00pm Mondays to Fridays are dispatched the same day

"Everything a comic book should be. Aworthy addition to any library."--IGN

Paul Dini is a multiple Emmy and Eisner Award-winning writer and producer who has helped redefine the legends of the DC Universe in such series as The New Batman/Superman Adventures, Batman Beyond, Krypto and Justice League Unlimited. In comics he has authored THE WORLD'S GREATEST SUPER-HEROES, illustrated by Alex Ross. Dini has also collaborated with Chip Kidd on Batman Animated for Harper Collins.