Items related to Dream of Fair to Middling Women

Dream of Fair to Middling Women 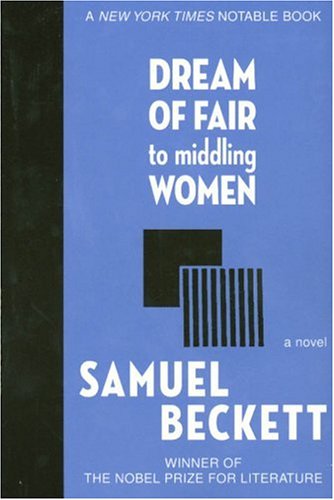 The first novel by the author of Waiting for Godot centers around the activities of Belacqua, a precursor of the playwright's more mature Molloy in Molloy, a young man whose attentions are divided between two women. Reprint.

Beckett's signature fierceness and piercing insight into the lurching of the mind are already evident in this early yet adept, high-energy, and boisterously libidinous novel.

Here, more than sixty years after it was written, is Nobel laureate Samuel Beckett's first novel. Written in a "white heat" in the summer of 1932 at the Hotel Trianon in Paris, when the author was poor and struggling, Dream of Fair to middling Women offers us a rare and revealing portrait of the artist as a young man. Beckett, just twenty-six at the time, to date had published a few poems, including the prize-winning "Whoroscope", a penetrating essay on Proust, and a contribution to the collective study of James Joyce's then Work in Progress, later to become Finnegans Wake. Beckett submitted the novel to several English publishers, all of whom found it too scandalous, too risky (or, said some, too risque), or too literary. Subsequently Beckett put the work aside, although he pilfered from it from time to time. After fame had overtaken him, he was still reluctant to publish it, partly because it contained thinly disguised and not always flattering portraits of some of the author's friends and acquaintances in Dublin, and partly because he was always his own harshest critic. The "hero" of Dream is one Belacqua - a youthful precursor of Molloy - who "wrestles with his lusts and learning across vocabularies and continents, before a final 'relapse into Dublin'" (The New Yorker). His love is divided between two women, Smeraldina-Rima and the Alba. Youthfully exuberant and visibly influenced by Joyce, Dream of Fair to middling Women is a work of extraordinary virtuosity in its own right. The author delights in wordplay and the sheer joy of language - indeed, of several languages. This is, too, one of Beckett's most Irish works, yet there is about it as well the sense of timelessness anduniversality that mark his later writing. Above all, it is filled with the unique Beckettian humor that, like brief stabs of sunlight, pierces the darkness of the vision. In his later years, Beckett agreed that Dream should eventually be published, but only "some little time" after his death. Now, more than six decades after it was written, this chest into which Beckett threw his wild thoughts can at last be opened, and its contents savored and enjoyed.

1. Dream of Fair to Middling Women: A Novel

2. Dream of Fair to Middling Women: A Novel