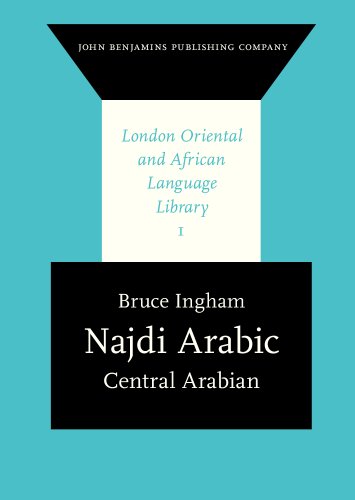 The region of Najd in Central Arabia has always been regarded as inaccessible, ringed by a belt of sand deserts, the Nafūd, Dahana and the Rub’ al-Khāli and often with its population at odds with the rulers of the outer settled lands. It is however the centre of a purely Arabian culture based on a partnership between bedouin camel husbandry and settled palm cultivation. Possibly as a result of overpopulation the bedouin have periodically spread over into the lands of the Fertile Crescent. Because of their isolated position the Najdi dialect is of a very interesting and archaic type showing very little non-Arabic influence, which has led to the reputation of the Arabian bedouin as preservers of the original Classical form and considerable prestige being attached to the Najdi type. Consequently the region is a powerhouse of dialect influence so that Najdi based dialects are spoken all along the Gulf Coast and throughout most of the Syrian Desert.
Interest in these dialects has led to a number of recent studies of their oral literature and of the morphology and phonology. Ingham's work concentrates on the grammatical system, syntax and usage and is based on a number of trips to the region over the last fifteen years. The data base includes bedouin oral narrative, ordinary conversation and radio plays.