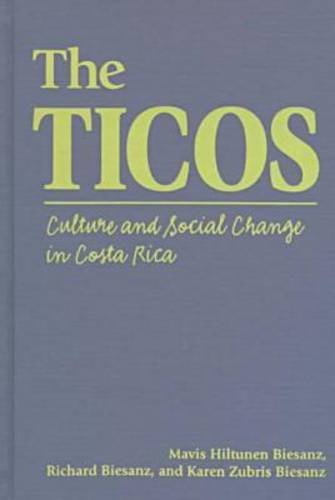 This volume traces the development of Costa Rica's culture and institutions. The authors describe how Costa Rica's economy, government, educational and health-care systems, family structures, religion, and other institutions have evolved, and how this has affected the people's lives.

An anthropological perspective on the Costa Rican people.
In this description of Latin America's reputedly most progressive country, published fifty years after it disbanded its army, we trace Costa Rica's transformation since Columbus' 1502 "discovery". Once the poorest and most neglected of Spain's American colonies, its literacy, infant mortality, and electoral democracy are now among the most favorable in the region. It is a locus both of foreign-owned textile sweatshops and of a huge Intel microchip plant, a mecca for birdwatchers and surfers as well as for swindlers and drug smugglers, destitute Nicaraguans and North American retirees. We examine Ticos' (Costa Ricans') core values, economy, government, class and ethnic relations, family structure, gender roles, education, religion, housing, medical beliefs and practices, soccer mania, and many other facets of their society and culture. We describe the life cycle from conception to burial, as well as the texture of daily life in each social class.

THE TICOS, a product of decades of participant observation, interviews, and scholarship, looks at Costa Rica from many perspectives. We note, for example, the reasons for the growth of a government bureaucracy that by l978 employed as many as one in every four workers--as well as the ways in which Costa Ricans joke about it and maneuver through it, and the pressures from the World Bank and other lenders to drastically reduce it in an attempt to reshape the country to the interests of multinational investors. We describe cultural influences on sexual behavior as well as the role of urban growth in popularizing sterilization and abortion. Likewise, we examine both the government's relations with the Roman Catholic church--the country's official church--and the reasons so many Catholics boast "I am not a fanatic", or have joined evangelical Protestant sects since the l970s.

The first Biesanz book about Costa Rica (COSTA RICAN LIFE, l944) is considered a classic. The University of Costa Rica has long used our l979 ethnography, LOS COSTARRICENSES, as a text in its required course, The National Reality. Several U.S. universities have used our l982 book, THE COSTA RICANS, in courses on Central America; many scholars, travellers, and foreign residents have found its insights both entertaining and useful. (A review in CHOICE called it "a very sensitive portrayal of Tico society and culture.") We hope that readers of THE TICOS, too, will enjoy our latest description of this unique country and its people.

Richard Biesanz is professor of sociology and anthropology at Corning Community College.

1. THE TICOS: CULTURE AND SOCIAL CHANGE IN COSTA RICA

2. The Ticos: Culture and Social Change in Costa Rica

Book Description Brand: Lynne Rienner Pub, 1998. Hardcover. Condition: VERY GOOD. Pages are intact and are not marred by notes or highlighting, but may contain a neat previous owner name. The spine remains undamaged. Supplemental materials are not guaranteed with any used book purchases. Seller Inventory # 1555877249_abe_vg

3. The Ticos: Culture and Social Change in Costa Rica

Book Description Lynne Rienner Pub, 1998. Condition: Good. A+ Customer service! Satisfaction Guaranteed! Book is in Used-Good condition. Pages and cover are clean and intact. Used items may not include supplementary materials such as CDs or access codes. May show signs of minor shelf wear and contain limited notes and highlighting. Seller Inventory # 1555877249-2-4

4. The Ticos: Culture and Social Change in Costa Rica

5. The Ticos: Culture and Social Change in Costa Rica