Items related to To Experience Wonder: Edna Staebler - A Life 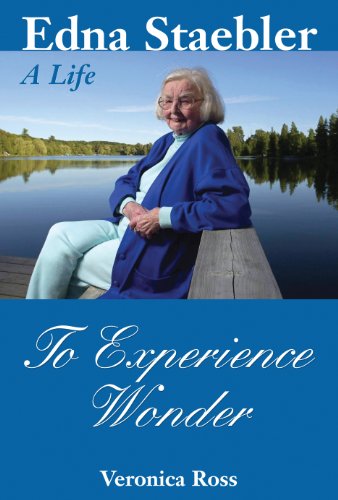 Canada’s foremost cookbook author began her career, not as a cook, but as a journalist writing for Canadian magazines. She was 60 when she turned her attention to food. Food That Really Schmecks immediately became a best-seller, and continues to sell 35 years later. It’s more than a book of wonderful recipes - it also describes the Mennonite way of life. The success of that book led to two more Schmecks books and many other cookbooks. Edna has received the Order of Canada among many other awards.

Over the years, Edna developed longstanding friendships with many of Canada’s greatest writers, including Margaret Laurence, W.O. Mitchell, Sheila Burnford, and Pierre Berton. In 1991 she established The Edna Staebler Award for Creative Non-fiction to recognize the first or second book of a Canadian writer.

To Experience Wonder is the first book to explore behind the scenes of this successful writer’s life. At the age of 97, Edna leads an active life at her cottage on Sunfish Lake, where she writes, reads, and welcomes the many aspiring writers who come to visit.

The long-awaited biography of one of Waterloo region's most beloved characters is a story both rich in detail and unfailing in its honesty. (The Kitchener-Waterloo Record)

A great writer, a fabulous cook and wonderful company. Edna Staebler, at the age of 98, is stull full of surprises-and secrets. (Canadian Living Magazine)

Hers has been a fruitful and fascinating life, well told by Ross. (London Free Press)

In her new biography of Staebler, To Experience Wonder, mystery novelist Veronica Ross Changes forms and provides insight into a woman who is so much more than the grandmotherly image that most of us associate with Staebler. Generations of readers have revelled in the abundance of Edna Staebler's storytelling and have found lifelong friends within the pages of her cookbooks. So although perhaps not quite the life she had envisioned for herself there can be no regrets about what she has given the rest of us. (Globe and Mail)

To experience Wonder takes (Edna Staebler's) fans behind the scenes of her life and is fascinating reading. (Toronto Sun)

Veronica Ross lives in Kitchener, Ontario with her husband, Richard O'Brien. She is the author of Hannah B., Order in the Universe, the popular Carolyn Archer mystery series, and other books. Her short stories have appeared in many magazines. She is currently working on a book about Russian history.