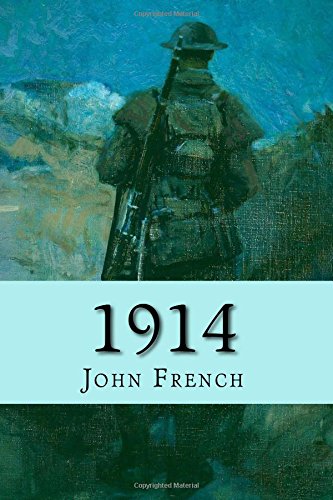 This classic World War One history text is prefaced, "For years past I had regarded a general war in Europe as an eventual certainty. The experience which I gained during the seven or eight years spent as a member of the Committee of Imperial Defence, and my three years tenure of the Office of Chief of the General Staff, greatly strengthened this conviction."

Field Marshal John Denton Pinkstone French, 1st Earl of Ypres, KP, GCB, OM, GCVO, KCMG, ADC, PC (28 September 1852 – 22 May 1925), known as Sir John French from 1901 to 1916, and as The Viscount French between 1916 and 1922, was a senior British Army officer. Born in Kent to an Anglo-Irish family, he saw brief service as a midshipman in the Royal Navy, before becoming a cavalry officer. He achieved rapid promotion and distinguished himself on the Gordon Relief Expedition. French had a considerable reputation as a womaniser throughout his life and his career nearly ended when he was cited in the divorce of a brother officer whilst in India in the early 1890s. French became a national hero during the Second Boer War. He won the Battle of Elandslaagte near Ladysmith, escaping under fire on the last train as the siege began. He then commanded the Cavalry Division, winning the Battle of Klip Drift during a march to relieve Kimberley. He later conducted Counter-insurgency operations in Cape Colony. During the Edwardian Period he commanded I Corps at Aldershot, then served as Inspector-General of the Army, before becoming Chief of the Imperial General Staff (CIGS, the professional head of the British Army) in 1912. During this time he helped to prepare the British Army for a possible European War, and was also one of those who insisted, in the so-called “cavalry controversy”, that cavalry still be trained to charge with cold steel rather than just fighting dismounted with firearms. During the Curragh incident he had to resign as CIGS after promising Hubert Gough in writing that the Army would not be used to coerce Ulster Protestants into a Home Rule Ireland. French’s most important role was as Commander-in-Chief (C-in-C) of the British Expeditionary Force (BEF) for the first year and a half of the First World War.