Items related to Address, The 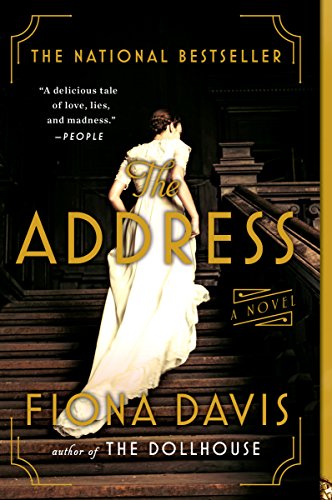 Sara, a servant in 1884 is given the opportunity to move to America and manage the grand New York apartment house, The Dakota. It offers her a world of possibility, including being close to the Dakota's famous architect, Theo. A hundred years later in 1984, interior designer Bailey is fresh out of rehab and is tasked with helping her cousin redesign her apartment in the famous Dakota. Once there, Bailey learns all about the building's history, including its architect Theo, and the mad woman named Sara who stabbed him to death.

Praise for The Address

"A delicious tale of love, lies and madness."--People Magazine

"Lively and detail rich--set against the backdrop of NYC's infamous Dakota building--with a thread of mystery that makes it easy to enjoy, hard to put down."--Family Circle "Spanning over 100 years, Fiona Davis' mystery is packed with deceit."--US Weekly "Fiona Davis again proves she is the master of the unputdownable novel."--Redbook

"If you're a historical fiction lover, we can't recommend The Address enough. It has an unparalleled attention to character and detail, and will transport you back in time to New York City faster than you can say 'The Dakota.'"--Hellogiggles.com "On the heels of last year's The Dollhouse--about life at the Barbizon Hotel--Fiona Davis is back with a compelling novel about two women, a century apart, who both find their lives forever changed by the Dakota, Manhattan's most famous apartment building."--Town & Country "An unforgettable, centuries-spanning tale of life and love in The Dakota, NYC's most famous apartment house."--SouthernLiving.com "Maid in Manhattan meets The Grand Budapest Hotel."--InStyle "Davis' characters will remind readers that sometimes, we have more in common with strangers than we think."--Real Simple

"Historically rich and poignant on matters of gender, social and economic in-equality, The Address is old New York at its finest."--PureWow "Fiona Davis delivers her fans a richly layered historical plot that explores the stories and rumors of one of Manhattan's most prestigious residences: The Dakota. From socialites to failed careers to amazing characters never to be forgotten, this is one of 2017's most glorious NY-based tales and needs to be enjoyed before summer ends."--Brit + Co

"Let this evocative novel sweep you away to another time and place."--POPSUGAR "Two women, connected but a century apart, find intrigue and hardship in the Dakota, New York City's landmark apartment building. Its fascinating history--mixed with romance, family discord and murder--makes this a fast-paced read."--Minneapolis Star-Tribune "Davis has folded together two historical eras in this breezy historical novel that jumps between Gilded Age and Reagan-era New York City...[she] overlays the two histories beautifully...The book, rife with historical description and architectural detail, will appeal to design and history buffs alike."--Publishers Weekly "With her nimble writing style, Davis makes pithy commentary on gender, social and economic in¬equality in both eras... This thought-provoking book makes you wonder what Edith Wharton would have made of these Camdens and pseudo-Camdens. Thankfully, Davis is here to tell us."--BookPage

"An evocative and intriguing story of love, class, secrets, and pasts, The Address tells the tale of two very different working women who lived almost a hundred years apart and the mystery that may or may not connect them and link their fates. Set at one of the most historic and glamorous apartment buildings in Manhattan, the book is this summer's perfect beach read."--Wendy Lawless, New York Times bestselling author of Chanel Bonfire and Heart of Glass "The Address transported me through the grand doors of the Dakota building, and right into the hearts of its inhabitants. Rich in historic glamour and hugely enjoyable."--Eve Chase, author of Black Rabbit Hall and The Wilding Sisters "A superb tale, masterfully told, with splendid detail and historical accuracy."--Andrew Alpern, author of The Dakota: A History of the World's Best-Known Apartment Building "Fiona Davis has a genuine flair for deftly created and memorable characters and the use of historical detail to skillfully engage the readers full attention."--Midwest Book Review Praise for The Dollhouse "Rich both in twists and period detail, this tale of big-city ambition is impossible to put down."--People "The Dollhouse is a thrilling peek through a window into another world--one that readers will savor for a long time."--Associated Press "An ode to old New York that will have you yelling for more seasons of Mad Men."--New York Post "Davis paints a scene of Darby's 1950s glamour for her audience that's a smart juxtaposition to Rose's modern-age New York, jumping between time periods clearly with often elegant prose....Davis's descriptive words are transporting....[A] poignant beach read."--New York Daily News "In her page-turning debut, Fiona Davis deftly weaves the storylines of two women living at the famed Barbizon hotel for women....Davis alternates the chapters between each woman until the twists and turns of their respective storylines ultimately weave together, upping the anticipation along the way."--RealSimple "This suspenseful novel about a woman who took a decidedly different path--and the journalist who wants to uncover her secrets--will quicken your pulse."--InStyle

"Davis layers on relationships and intrigue, while building tension through her story structure....The pace quickens as the story hurtles to its surprising--but satisfying--end. Who said history had to be dull, anyway?"--BookPage "Davis's impeccably structured debut is equal parts mystery, tribute to midcentury New York City, and classic love story....Darby and Rose, in alternating chapters, weave intricate threads into twists and turns that ultimately bring them together; the result is good old-fashioned suspense."--Publishers Weekly (starred review)

"Fiona Davis's debut novel deftly blends the contemporary and midcentury storylines to form a wholly absorbing and entertaining read....Period fiction mingled with twists and turns that keep the reader engrossed until the very last page."--Bookreporter.com

"Davis's debut novel...[is] a lively one, tripping along at a sprightly clip."--Kirkus Reviews "Get ready for glitz, glamour, and a whole lot of sleuthing."--Brit + Co "Clever and full of twists....A story well told."--New York Journal of Books "Sensory and vivid....A zippy plot and [a] refreshing focus on the lives of women many would overlook."--The Dallas Morning News "Highly readable, The Dollhouse conjures up 1950s New York convincingly. In particular the now-vanished world of the Barbizon Hotel for Women, with its antiquated rules and intriguing array of female personalities and tragic fates, lives on in the pages of the novel in delectable detail....This is no mere 'chick-lit, ' but feminist-inspired entertainment."--Historical Novel Society "Fans of Suzanne Rindell's Three-Martini Lunch will enjoy this debut's strong sense of time and place as the author brings a legendary New York building to life and populates it with realistic characters who find themselves in unusual situations."--Library Journal "Davis delivers a fast-paced, richly-imagined debut that's almost impossible to put down."--Kathleen Tessaro, author of The Perfume Collector "The ghosts of the famed NYC women's hotel come to life in The Dollhouse. Davis expertly weaves together the stories of several women who lived in the Barbizon during its heyday in the 1950s, and the broken-hearted journalist who decides to get the 'scoop' on a decades-old tragedy that happened in the building. A fun, page-turning mystery."--Suzanne Rindell, author of The Other Typist and Three-Martini Lunch "Multigenerational and steeped in history, The Dollhouse is a story about women--from the clicking anxiety of Katie Gibbs's secretaries to the willowy cool of Eileen Ford's models, to honey-voiced hatcheck girls and glamorous eccentrics with lapdogs named Bird. Davis celebrates the women of New York's present and past--the ones who live boldly, independently, carving out lives on their own terms."--Elizabeth Winder, author of Pain, Parties, Work: Sylvia Plath in New York, Summer 1953 "Two coming-of-age stories rolled into an ode to New York City and the young women--of past and present--who have tried to forge lives and careers there. Poetic, romantic, crushing, and soulful."--Jules Moulin, author of Ally Hughes Has Sex Sometimes About the Author:

Fiona Davis is the nationally bestselling author of The Masterpiece, The Dollhouse, and The Address. She lives in New York City and is a graduate of the College of William and Mary in Virginia and the Columbia Journalism School.

Book Description Dutton, 2018. Paperback. Condition: New. An excellent New Condition book at a sensible price. Clean, tight and unmarked. A gem. Sat on a shelf. We ship within 24 hours carefully wrapped. No need to pay more. We sell books from New to Acceptable. We take care to be accurate in our description. Most of our books were gently read and in fine condition. BNCTucsonbooks ships daily. Proceeds from the sales of books support an endowed scholarship to Brandeis University, Waltham Mass. Seller Inventory # mon0000087610