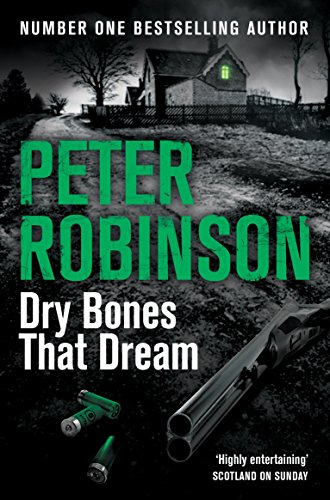 Dry Bones That Dream is the seventh novel in Peter Robinson's Inspector Banks series, following on from Wednesday's Child.

It was 2.47 a.m. when Chief Inspector Alan Banks arrived at the barn and saw the body of Keith Rothwell for the first time. Only hours earlier two masked men had walked the mild-mannered accountant out of his farmhouse and clinically blasted him with a shotgun.

Clearly this is a professional hit – but Keith was hardly the sort of person to make deadly enemies. Or was he? For the police investigation soon raises more questions than answers. And who, exactly, is Robert Clavert?

The more Banks scratches the surface, the more he wonders what lies beneath the veneer of the apparently happy Rothwell family. And when his old sparring partner Detective Superintendent Richard Burgess arrives from Scotland Yard, the case take yet another unexpected twist . . .

Robinson excels in the depiction of character . . . He is steadily ascending toward the pinnacles of crime fiction (Publishers Weekly)

Chief Inspector Banks investigates an execution-style murder but he starts to suspect the victim was leading a double life. Dry Bones That Dream is Peter Robinson's seventh novel in the Inspector Banks series which became the major British ITV drama DCI Banks.

Book Description Pan, 2016. Paperback. Condition: Good. All orders are dispatched the following working day from our UK warehouse. Established in 2004, we have over 500,000 books in stock. No quibble refund if not completely satisfied. Seller Inventory # mon0004944424

Book Description Pan 25/08/2016, 2016. Condition: Good. Will be shipped promptly from UK warehouse. Book is in good condition with no missing pages, no damage or soiling and tight spine. There may be some dog-eared pages showing previous use but overall a great book. Seller Inventory # 9053-9781509810758

Book Description Pan 25/08/2016, 2016. Condition: Very Good. This book is in very good condition and will be shipped within 24 hours of ordering. The cover may have some limited signs of wear but the pages are clean, intact and the spine remains undamaged. This book has clearly been well maintained and looked after thus far. Money back guarantee if you are not satisfied. See all our books here, order more than 1 book and get discounted shipping. . Seller Inventory # 7719-9781509810758

Book Description Paperback. Condition: Good. The book has been read but remains in clean condition. All pages are intact and the cover is intact. Some minor wear to the spine. Seller Inventory # GOR008631240

Book Description Paperback. Condition: Fair. A readable copy of the book which may include some defects such as highlighting and notes. Cover and pages may be creased and show discolouration. Seller Inventory # GOR009011017

Book Description Paperback. Condition: Very Good. The book has been read, but is in excellent condition. Pages are intact and not marred by notes or highlighting. The spine remains undamaged. Seller Inventory # GOR007932588

Book Description Pan, 2016. Condition: Good. New Edition. Ships from the UK. Former Library book. Shows some signs of wear, and may have some markings on the inside. Seller Inventory # GRP97647212