Items related to In a Dark, Dark Wood

In a Dark, Dark Wood 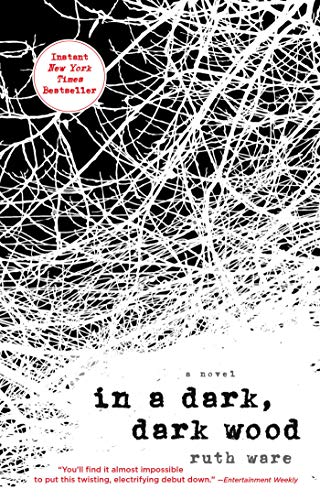 *AUTHOR OF THE WOMAN IN CABIN 10 and THE LYING GAME
*INSTANT NEW YORK TIMES, USA TODAY, AND LOS ANGELES TIMES BESTSELLER
*SOON TO BE A MAJOR MOTION PICTURE

An NPR Best Book of the Year * An Entertainment Weekly Summer Books Pick * A Buzzfeed "31 Books to Get Excited About this Summer" Pick * A Publishers Weekly "Top Ten Mysteries and Thrillers" Pick * A Shelf Awareness Best Book of the Year * A BookReporter Summer Reading Pick * A New York Post "Best Novels to Read this Summer" Pick * A Shelf Awareness "Book Expo America 2015 Buzz Book" Pick What should be a cozy and fun-filled weekend deep in the English countryside takes a sinister turn in Ruth Ware's suspenseful, compulsive, and darkly twisted psychological thriller. Sometimes the only thing to fear...is yourself. When reclusive writer Leonora is invited to the English countryside for a weekend away, she reluctantly agrees to make the trip. But as the first night falls, revelations unfold among friends old and new, an unnerving memory shatters Leonora's reserve, and a haunting realization creeps in: the party is not alone in the woods.

I started IN A DARK, DARK WOOD on an airplane, kept dipping into it whenever I was left alone, devoured another big chunk on the flight home, and after that surrendered myself to it until the last revelation had bloomed, the final surprise had exploded, and the bittersweet conclusive turn had folded the final page. Ruth Ware has written an exciting, and in fact amazing book that never stops circling around behind the reader and clapping its cold hands over her eyes.--Peter Straub, New York Times bestselling author

I raced through this, totally unable to put it down...Dark, smart and compulsive.--Nicci Cloke, author of Lay Me Down

"Likely to be the next Gone Girl."--Elizabeth Willse "Surrounded by Books "

"An English psychological thriller...compared to Gone Girl and Girl on the Train."--Steve Bennett "My San Antonio "

"So gripping. So glad my hen days are behind me. It's going to be huge."--Tamar Cohen, author of Dying for Christmas and The Broken

"If the premise might be the sort that Agatha Christie would have toyed with had she been a 21st-century graduate, Ware's analysis of the power-games some women revel in - and the toxicity in the undertow of some female friendships - is more reminiscent of Sophie Hannah, Christobel Kent, or even Gillian Flynn and Harriet Lane."--Patricia Nicol "Independent "

"The next Girl on the Train...Ware hews [close] to the new genre of twisty-mystery women's books."--Vulture

"Ware slowly unspools the mystery, setting a truly spooky scene ... with a constant undercurrent of danger. Read it on adark and stormy night--with all the lights on."--Kirkus Reviews

"Who pulls a gun at a bachelorette party? The answers are unveiled with Gillian Flynn-style trickery."--O Magazine

Film rights snapped up by Reese Witherspoon - this is the next big thing in crime fiction, we've had toxic marriages, this is about toxic friendships.

8. In a Dark, Dark Wood (Paperback or Softback)