Items related to The House Of The Dead: Or Prison Life In Siberia

Dostoevsky, Fyodor The House Of The Dead: Or Prison Life In Siberia

The House Of The Dead: Or Prison Life In Siberia 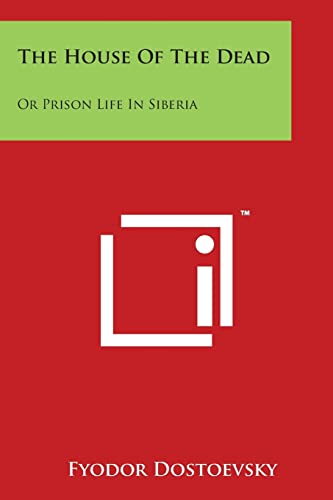 This Is A New Release Of The Original 1911 Edition.

Fyodor Dostoyevsky was a Russian novelist, short story writer and essayist whose literary works explored human psychology in the troubled political, social, and spiritual context of nineteenth-century Russia. A student of the Nikolayev Military Engineering Institute, Dostoyevsky initially worked as an engineer, but began translating books to earn extra money. The publication of his first novel, Poor Folk, allowed him to join St. Petersburg s literary circles. A prolific writer, Dostoyevsky is best known for work from the latter part of his career, including the classic novels Crime and Punishment, The Idiot and The Brothers Karamazov. Dostoyevsky s influence extends to authors as diverse as Anton Chekhov, James Joyce, Ernest Hemingway, and Jean-Paul Sartre, among many others. He died in 1881.

1. The House Of The Dead: Or Prison Life In Siberia (Paperback)