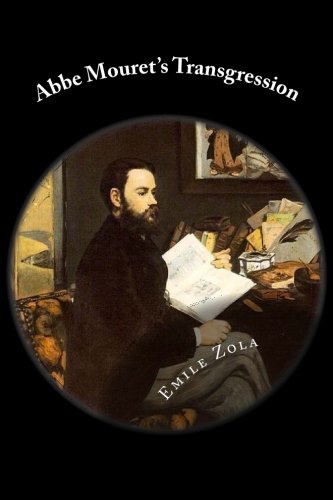 Abbe Mouret's Transgression (1875) is the fifth novel in Emile Zola's twenty-volume series Les Rougon-Macquart. Viciously anticlerical in tone, it follows on from the horrific events at the end of La Conquęte de Plassans, focussing this time on a remote Provençal backwater village. The plot centres on the neurotic young priest Serge Mouret, first seen in La Conquęte de Plassans, as he takes his orders and becomes the parish priest for the disinterested village of Artauds. The inbred villagers have no interest in religion and Serge is portrayed giving several wildly enthusiastic Masses to his completely empty, near-derelict church. Serge not only seems unperturbed by this state of affairs but actually appears to have positively sought it out especially, for it gives him time to contemplate religious affairs and to fully experience the fervour of his faith. Eventually he has a complete nervous breakdown and collapses into a near-comatose state, whereupon his distant relative, the unconventional doctor Pascal Rougon (the central character of the last novel in the series, 1893's Le Docteur Pascal), places him in the care of the inhabitants of a nearby derelict stately home, Le Paradou.

The church at Les Artaud stood on a hillock above the isolated village, looking out onto desolate landscape all around. It was to this harsh and near pagan place that the Abbe Serge Mouret had come as parish priest, hoping to realize his craving for solitude and his dream of an existence of Godlike purity. Then, one day, with his uncle Doctor Pascal, he goes to visit 'the Philosopher' at Paradou where they chance to meet the sixteen-year-old Albine. Later, when the Abbe falls ill, it is to Paradou that he is brought to recover. Unwittingly, in the enchanted garden, he falls to the temptation of Albine. But when at last he awakens from his dream-like state, he is horrified, and is left to confront his transgression. In this story, the ninth novel in the Rougon-Macquart series, Zola provides a damning indictment of the celibacy of the priesthood, and takes up the issue of the law of Nature versus the law of the Church. One of Zola's best works, it contains some of his most lyrical writing, in particular in the fine descriptions of the garden.

Emile Edouard Charles Antoine Zola (2 April 1840 – 29 September 1902) was a French writer, the most important exemplar of the literary school of naturalism and an important contributor to the development of theatrical naturalism. He was a major figure in the political liberalization of France and in the exoneration of the falsely accused and convicted army officer Alfred Dreyfus, which is encapsulated in the renowned newspaper headline J'accuse.