Items related to Bordeaux & the Pyrenees: A Bicycle Your France...

Bordeaux & the Pyrenees: A Bicycle Your France Guidebook 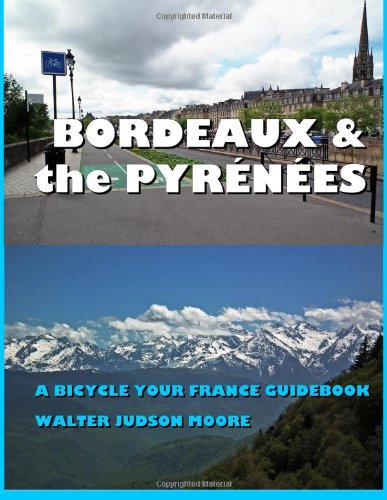 This guidebook spotlights routes around Bordeaux, the Garonne Canal and the Pyrénées in the southwest of France. There are 16 cycling routes mapped and profiled. The guide includes 53 comments on some villages, a canal, rivers, historical people and points of interest along the way. Included with each route is the latest method for listing Waypoints that locates its longitude and latitude in degrees, minutes and seconds (to the hundredth), and in digital format. Elevation data was acquired every 200 meters on each route and new profiles drafted. As with all other BICYCLE YOUR FRANCE guidebooks, this guide also offers a companion, QUEUE SHEETS, with just the Waypoint GPS located listings, route maps and elevation profile. Details: 109 pages; 11” x 8.5”; English; 16 two-page color route maps; one single page color overview map; 197 color photographs and illustrations. In addition to the print format, this guidebook and the Queue Sheets are available for Kindle devices and in the Adobe Digital Editions for Apple iPad devices. Route maps are presented in two halves in 800x1260 pixels appropriate for the 7” and 8.9” Kindle Fire HD. Smaller graphics and photographs are in 800x1260 pixels. You can handle any and all of these sixteen routes, from the highest paved road in the Pyrénées to the flat woods through the Médoc. It all depends on your lungs, thighs, patience and proper selection of grandparents. All the routes are through the Aquitaine Region of southwest France with its extraordinary history. The jagged, snow-capped peaks of the Pyrénées are breathtaking, physically and emotionally. But this great range is very approachable. In addition to the routes way up four mountain passes, two routes utilize the Piste Cyclable Roger Labadie, and four routes follow the cycle path along the Canal de Garonne. Visit Eleanor of Aquitaine’s city of Bordeaux, King Henry IV’s château in Nérac, ask about Richard the Lionheart’s chamber overlooking the Eymet central square, and walk around the last battle of the Wars of Religion in Castillion-la-Bataille. Then throw in Castillonnès, Agen, Villeneuve-sur-Lot, Pau and Oloron-Ste-Marie. This becomes a journey through the Middle Ages. Basic data are included on selecting a community, finding and renting a gîte, bringing your bike or renting a good one, having or renting a vehicle, driving in France, what to bring, buying groceries and something on restaurants. With each new guidebook I become more convinced that the best way to engage totally with a region is to bicycle it. Get out there you cycling pilgrims.

Walter Judson Moore was born in 1939. After service in the U. S. Navy and graduating from the Michigan State University College of Engineering, he spent a thirty-year career in private industry. His writing occupation started in 2001. Bordeaux & the Pyrénées: A Bicycle Your France Guidebook is his ninth guidebook of ten. He and his wife live in west central Florida.

Buy Used
Condition: As New
BC316 SHIP SAME DAY or Next Available... Learn more about this copy

1. Bordeaux & the Pyrenees: A Bicycle Your France Guidebook