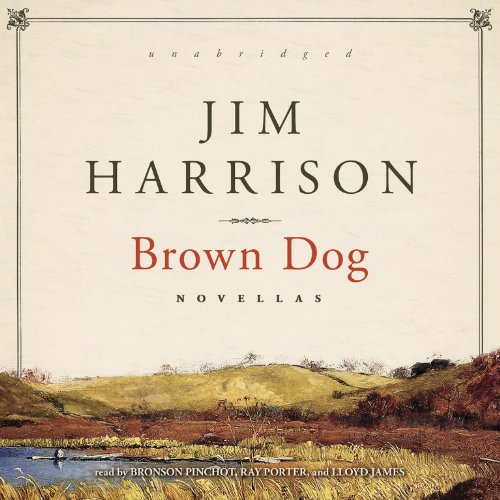 An anthology of all of the Brown Dog novellas includes a previously unpublished story and follows the down-on-his-luck Michigan Native American's misadventures with an overindulgent lifestyle, his two adopted children, and an ersatz activist who steals his bearskin.

A Publishers Weekly Best Book of 2013

What Harrison does on every page of Brown Dog is have fun . . . not simply for the sake of delight but because he believes delight is as close to sublimity as humans can get. . . . The great project of life, he reminds us, is to sit still long enough to appreciate it.” Anthony Doerr, The New York Times Book Review

Brown Dog is . . . an everyman on the most fundamental level . . . vividly, evocatively, alive. . . . These novellas read like a nuanced conversation between author and character. . . . Masterful.” David Ulin, Los Angeles Times

Harrison’s writing is funny, generous, and bittersweet, with an unexpected, plain-speaking poetry.” Andrea Denhoed, New Yorker (Online Books to Watch Out For”)

There’s no mistaking Harrison’s signature style. . . . Brown Dog is rich in character and incident, rude humor and melancholy. It is both heartfelt and ruefully real.” William S. Kowinski, The San Francisco Chronicle

The delightful and maddening character of Brown Dog . . . [is] one of Harrison’s best-loved creations. . . . [Brown Dog] stands among Harrison’s best work.” Tim McNulty, The Seattle Times

Harrison’s [prose] is exuberant. . . . I can’t think of a better writer on the clash of humans and the natural world. He’s a force of nature on the page.” Porter Shreve, The Washington Post

Lovable . . . Brown Dog . . . is a big-hearted rascal who is always getting into deep trouble with the ladies, and often with the law. . . . Strong and spirited, and there is some great storytelling here.” Jim Carmin, Minneapolis Star Tribune

Is there another novelist in the last hundred years who has developed a character as vivid as Brown Dog? . . . Mr. Harrison’s . . . skill at developing and fleshing out characters into breathing beings people you know or once knew is remarkable.” Jonathan Rickard, New York Journal of Books

B.D.’s adventures are quirky, sometimes humorous, sometimes illegal. . . . But his simplicity is all on the surface. As Harrison artfully shows, inside B.D. roil the complexities of his past, a past that dances in ancient choreography with his present and his future.” Daniel Dyer, The Cleveland Plain Dealer

One of literature’s great characters. . . . An essential collection from an American legend.” Publishers Weekly (Best of 2013)

One of America’s greatest writers . . . An indelible character . . . Brown Dog is a robust, ribald, and irreverent tribute to the idea and ideal of maximum life.” David Masciotra, The Daily Beast

Deeply magnetic . . . [Brown Dog] leaps off the page with the same comedy and verve that Ignatius J. Reilly does in . . . A Confederacy of Dunces.” Dimitri Nasrallah, Toronto Star (Canada)

One of the great characters in American literature as American as Twain’s Huck Finn or Hemingway’s Nick Adams.” Bruce Jacobs, Shelf Awareness

Pity poor Brown Dog, the Everyman of the North Woods, whose luck would be nonexistent were it not bad. Still, Brown Dog’s countenance is as cheerful as Don Quixote’s was woeful. . . . Rollicking, expertly observed, beautifully written. Any new book by Harrison is cause for joy, and having all the Brown Dog stories in one place is no exception.” Kirkus Reviews (starred review)

Jim Harrison is the author of thirty-five previous books of poetry, nonfiction, and fiction, including Legends of the Fall, The Road Home, Returning to Earth, and The English Major. A member of the American Academy of Arts and Letters and winner of a Guggenheim Fellowship, he has had work published in twenty-seven languages. Harrison lives in Montana and Arizona.