Items related to Liars & Outliers: Enabling the Trust That Society...

Liars & Outliers: Enabling the Trust That Society Needs to Thrive 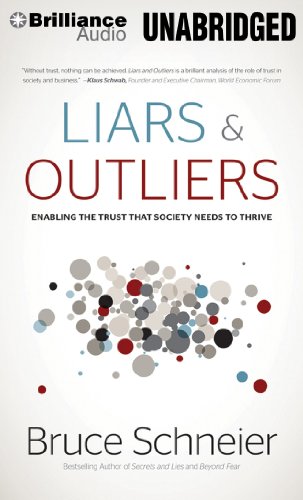 In today's hyper-connected society, understanding the mechanisms of trust is crucial. Issues of trust are critical to solving problems as diverse as corporate responsibility, global warming, and the political system. In this insightful and entertaining audiobook, Schneier weaves together ideas from across the social and biological sciences to explain how society induces trust. He shows the unique role of trust in facilitating and stabilizing human society. He discusses why and how trust has evolved, why it works the way it does, and the ways the information society is changing everything.

"One of the best books I′ve read this year is by a security technologist, Bruce Schneier. In Liars and Outliers, he sets out to investigate how trust works in society and in business, how it is betrayed and the degree to which technology changes all of that, for the better or the worse. Schneier absolutely understands how profoundly trust oils the wheels of business and of daily life." (Margaret Heffernan, CBS MoneyWatch)

"This book will appeal not only to customers interested in computer security but also on the idea of security and trust as a whole in society." (The Bookseller, 16th December 2011)

"This book should be read by anyone in a leadership role, whether they′re in the corporate or political sphere... an easy read and the ideas and thoughts are profound." (Naked Security, February 2012)

"By concentrating on the human angle and packing the book with real world examples he has successfully stretched its appeal outside that of the security specialist to the more general reader." (E & T Magazine, March 2012)

Q: In your book, Liars and Outliers, you write, “Trust and cooperation are the first problems we had to solve before we could become a social species—but in the 21st century, they have become the most important problems we need to solve again.” What do you mean by trust?
A: That is the right question to ask, since there are many different definitions of trust floating around. The trust I am writing about isn’t personal, it’s societal. By my definition, when we trust a person, an institution, or a system, we trust they will behave as we expect them to. It’s more consistency or predictability than intimacy. And if you think about it, this is exactly the sort of trust our complex society runs on. I trust airline pilots, hotel clerks, ATMs, restaurant kitchens, and the company that built the computer I’m writing these answers on.

Q: What makes people trustworthy?
A: That’s the key question the book tackles. Most people are naturally trustworthy, but some are not. There are hotel clerks who will steal your credit card information. There are ATMs that have been hacked by criminals. Some restaurant kitchens serve tainted food. There was even an airline pilot who deliberately crashed his Boeing 767 into the Atlantic Ocean in 1999. Given that there are people who are naturally inclined to be untrustworthy, how does society keep their damage to a minimum? We use what I call societal pressures: morals and reputation are two, laws are another, and security systems are a fourth. Basically, it’s all coercion. We coerce people into behaving in a trustworthy manner because society will fall apart if they don’t.

Q: You introduce the idea of defectors—those who don’t follow “the rules.” What are defectors?
A: One of the central metaphors of the book is the Prisoner’s Dilemma, which sets up the conflict between the interests of a group and the interests of individuals within the group. Cooperating—or acting in a trustworthy manner—sometimes means putting group interest ahead of individual interest. Defecting means acting in one’s self-interest as opposed to the group interest. To put it in concrete terms: we are collectively better off if no one steals, but I am individually better off if I steal other people’s stuff. But if everyone did that, society would collapse. So we need societal pressures to induce cooperation—to prevent people from stealing. There are two basic types of defectors. In this example, the first are people who know stealing is wrong, but steal anyway. The second are people who believe that, in some circumstances, stealing is right. Think of Robin Hood, who stole from the rich and gave to the poor. Or Jean Valjean from Les Miserables, who stole to feed his starving family.

Q: What major news stories of the past decade were triggered by failed trust? How can we prevent these failures in the future?
A: The story I had most in mind while writing the book was the global financial crisis of a few years ago, where a handful of people cheated the system to their own advantage. Those were particularly newsworthy defectors; but if you start looking, you can see defectors and the effects of their defection everywhere: in corrupt politicians, special interests subverting the tax system, file sharers downloading music and movies without paying for them, and so on. The key characteristic is a situation where the group interest is in opposition to someone’s self-interest, and people have been permitted to follow their own self-interest to the greater harm of the group.

Q: What makes Liars and Outliers so relevant in today’s society?
A: As our systems--whether social systems like Facebook or political systems like Congress--get more complex, the destructive potential of defectors becomes greater. To use another term from the book, the scope of defection increases with more technology. This means that the societal pressures we traditionally put in place to limit defections no longer work, and we need to rethink security. It’s easy to see this in terms of terrorism: one of the reasons terrorists are so scary today is that they can do more damage to society than the terrorists of 20 years ago could—and future technological developments will make the terrorists of 20 years from now scarier still.

Q: What do you hope readers will take away from reading Liars and Outliers?
A: I can do no better than quote from the first chapter: “This book represents my attempt to develop a full-fledged theory of coercion and how it enables compliance and trust within groups. My goal is to rephrase some of those questions and provide a new framework for analysis. I offer new perspectives, and a broader spectrum of what’s possible. Perspectives frame thinking, and sometimes asking new questions is the catalyst to greater understanding. It’s my hope that this book can give people an illuminating new framework with which to help understand the world.”