Items related to Circle of the Sacred Drum School of ShamanismWorkbook:...

Circle of the Sacred Drum School of ShamanismWorkbook: Workbook 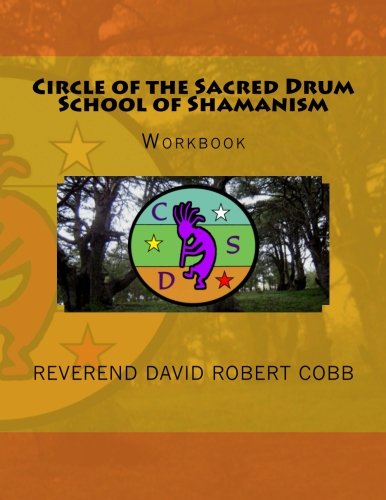 Reverend David Cobb has been studying the occult arts since 1986. Brought up as a devout Baptist he attended private Christian schools until he was 13. During this time he studied the ancient Mesopotamia River Valley civilizations, particularly the Sumerian and Babylonian cultures and religious practices. When he was 14, he was enrolled into public schools, where he began studying mixed martial arts, Zen Buddhism, ancient Greek philosophy, and the philosopher Rene Descartes. After high school graduation in 1986, Reverend Dave began studying Wicca and formed a small coven, which he disbanded a year later to pursue studies into ceremonial magick influenced by the Order of the Golden Dawn and the Rosicrucian’s, at this time he also was a member of a Pentecostal youth ministry. Longing for a more earthly and nature based system of magick, Reverend Dave returned to the Wiccan lifestyle and discovered shamanism along the way. In 2010, he found the Correllian Nativist Tradition of Wicca and Witch School International, or should we say, it found him. Currently, Reverend Dave is a licensed Wiccan Minister through Universal Life Church, a Reiki Master and Teacher, a First Degree Mentor for Witch School International, a Shamanic Practitioner, and a Priest and Spiritual Leader of the Circle of the Sacred Drum, a Witan Shrine of the Correllian Nativist Tradition, author of Call of the Sacred Drum - Shamanic Healing Methods for Wiccan Healers, and Headmaster of the Circle of the Sacred Drum School of Shamanism. Outside the Wiccan community, Reverend Dave works as a Certified Medical Assistant specializing in orthopaedics, and is a former United States Army National Guard Combat Medic, and Emergency Medical Technician. He currently lives in the Atlanta, Georgia area with his Ayami Lauren, and his spirit helpers; Fox, Bear, Master Roland, and Lady Ariel.

1. Circle of the Sacred Drum School of ShamanismWorkbook : Workbook

Book Description CreateSpace Independent Publishing Platform. Paperback. Condition: Good. A copy that has been read, but remains in clean condition. All pages are intact, and the cover is intact. The spine may show signs of wear. Pages can include limited notes and highlighting, and the copy can include previous owner inscriptions. At ThriftBooks, our motto is: Read More, Spend Less. Seller Inventory # G1480293148I3N00