Items related to Dolphin Square: The History of a Unique Building

Gourvish, Terry Dolphin Square: The History of a Unique Building

Dolphin Square: The History of a Unique Building 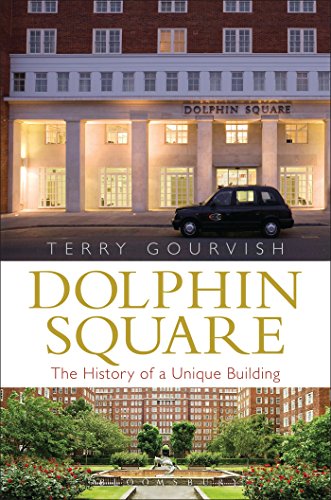 Blending social history with pioneering architecture and business analysis, Dolphin Square provides a detailed history of the London landmark and its antecedents.
Dolphin Square was and is no ordinary block of flats. Built on a massive scale to a high density in the mid-1930s, it was a pioneering example of concrete design, and when completed was the largest single residential building in Europe.
The book begins with the antecedents of the seven-acre site, which was first occupied by the workshops of Thomas Cubitt, when he developed Pimlico and Belgravia. Conceived as a speculative housing project and later catering for MPs, peers and entertainers required to work in London, this book tells the story of the Dolphin Square project and also captures what it has been like to live in the square for figures including Ellen Wilkinson, Alistair Darling, William Hague, Mo Mowlam, Sir David Steel, Christine Keeler, Sid James, Barbara Windsor and Princess Anne.The book charts the square's changing ownership and eventual creation of the Dolphin Square Trust, which managed the flats on a non-profit-making basis for 40 years.
Dolphin Square breaks new ground in providing a detailed examination of a major example of urban property speculation and management.

Terry Gourvish is Director of the Business History Unit, London School of Economics & Political Science, and a Fellow of the Royal Historical Society. He was until recently Chairman of the Business Archives Council and President of the Association of Business Historians. He has undertaken several commissioned histories, for the British Railways Board, Brewers' Society, Cabinet Office, Department for Transport/Strategic Rail Authority, and a number of private sector companies.

An exceptional account of one of London's most distinctive residential developments, combining the analytical rigour of business history with the rich human interest of social history. Altogether, Terry Gourvish's scrupulously told story marks a major contribution to our understanding of twentieth-century London. -- David Kynaston Terry Gourvish's authoritative history relates the fascinating story of the Square and the people who lived there. It also describes the non-profit making Dolphin Square Trust, which for over forty years ran the Square for the benefit of its tenants. Anyone interested in the history of London, its society and its housing will be engrossed by Dr Gourvish's compelling book. -- Sir Rodney Brooke, CBE, DL former Chairman of the Dolphin Square Trust Dolphin Square is a unique residential block in every respect. At last it has the history it deserves. -- Sir Alan Dawtry, CBE, TD former Vice-Chairman of the Dolphin Square Trust