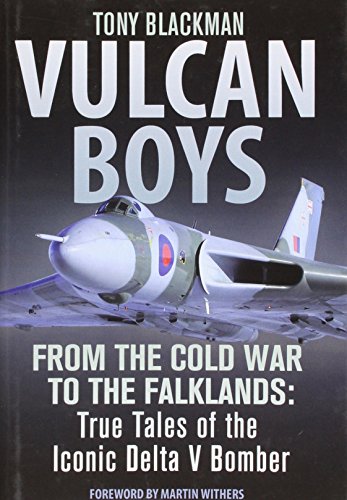 The Vulcan, the second of the three V bombers built to guard the UK during the Cold War has become an aviation icon like the Spitfire, its delta shape is instantly recognisable as is the howling noise it makes when the engines are opened for take-off. Vulcan Boys is the first Vulcan book recounted completely first hand by the operators themselves. It tells the story of the aircraft from its design conception through the Cold War when it played out its most important job as Britain's nuclear deterrent; before unbelievably, at the end of its service life, also playing a significant role, with its bombs and missiles, in liberating the Falkland Islands for which it gained much celebrity. The individual accounts detail how hours at a time were spent on readiness, waiting to be scrambled to defend their country in the event of a third world war. In addition how their aggressive skills were honed by carrying out Lone Ranger sorties flying to the States and westward around the world, and taking part in Giant Voice and Red Flag, competitive exercises against the United States Strategic Air Command. The attacks in the Falklands using Shrike missiles are described accurately and in great detail for the first time including the landing at Rio de Janeiro alongside a vivid account of Black Buck 2. Vulcan Boys is a fascinating and completely authentic read reminding us of the Cold War, how it was fought and the considerable effort required to prevent all-out nuclear war.

Vulcan Boys, by ex RAF man and former test pilot Tony Blackman, is the first Vulcan book recounted completely first-hand by the operators themselves. The book's individual accounts from contributors detail how hours at a time were spent on readiness, waiting to be scrambled to defend the UK in the event of a third world war. The attacks on the Faulkland Islands using Shrike missiles are described in great detail, for the first time, including the landing at Rio. This is a first-class title! --Royal Air Force News

Featuring a forward by present day XH558 and Falklands' pilot Martin Withers, Vulcan Boys is the first book about the mighty delta to be recounted entirely by the operators themselves. It tells the story of the aircraft from its design conception through the Cold War when it played out arguably its most important job as Britain's nuclear deterrant; before also playing a significant role towards the end of its service life in the Falklands conflict. The individual accounts describe how hours at a time were spent at readiness, waiting to be scrambled, and how skills were honed during sorties to the US and participation in competitive exercises. The attacks in the Falklands, incuding Black Buck operations and the use of Shrike missiles, are recounted in detail, together with the landing at Rio de Janeiro. The stories are collated and set in context by Tony Blackman, a former chief test pilot for Avro. --Flypast
Vulcan Boys would be an excellent addition to any aviation library. The work reads well and provides valuable insights. Therefore, this reviewer (John Stemple) highly recommends Mr. Blackman s book. -- 20th Century Aviation magazine.
Vulcan Boys is based entirely upon first-hand accounts by the operators and crews themselves. It tells the story of the aircraft from its design and conception through the Cold War when its played out its part in providing Britain's nuclear dterrent as well as its role in the Falklands war. --Britain at War Magazine

For anyone who flew, or flew in, V-bombers this book will certainly ring some bells. Recommended. There is much to enjoy - especially if you are a V-force veteran. - Royal Air Force Historical Society

Trips to North America, a round-the-world flight, Blue Steel experiments and many other things all add up to an extremely interesting read. Those who remember the splendid RAF Vulcan displays at various airshows will revel in this. Vulcan Boys comes highly recommended.

Tony Blackman has spent his life in the aircraft industry as a test pilot, as an avionics specialist and then on the Board of UK Civil Aviation Authority as the Technical Member.