Items related to A Man's World: The Double Life of Emile Griffith

A Man's World: The Double Life of Emile Griffith 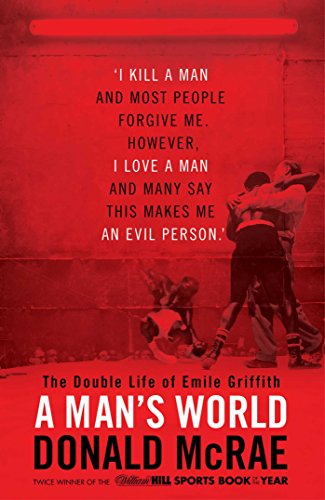 SHORTLISTED FOR THE WILLIAM HILL SPORTS BOOK OF THE YEAR PRIZE 2015.

'I kill a man and most people forgive me. However, I love a man and many say this makes me an evil person.'
On 24 March 1962, when Emile Griffith stepped into the ring in Madison Square Garden to defend his world title against Benny Paret, he was filled with rage. During their weigh-in, the Cuban challenger had denounced Griffith as a 'faggot' and minced towards him. In the macho world of boxing, where fighters know they are engaged in the hurt game, there could be no greater insult. At that time, it was illegal for people of the same gender to have sex, or even for a bar to knowingly serve a drink to a gay person. It was an insinuation that could have had dangerous consequences for Griffith - especially as it was true.
In the fight that followed, Griffith pounded Paret into unconsciousness, and the Cuban would die soon after, leaving Griffith haunted by what he had done. Despite this, he went on to fight more world championship rounds than any other fighter in history in a career that lasted for almost 20 years.
In Donald McRae's first sports book in more than a decade, he weaves a compelling tale of triumph over prejudice - Griffith was black, so doubly damned by contemporary society, but refused to cower away as society wished. A Man's World is sure to become a classic piece of sports writing.

'McRae - a South African who is arguably Britain's most garlanded author on sport - has done it again with the story of a black boxer who was secretly gay, killed an opponent in the ring, and then got pugilistic dementia. An astonishing story, simple told through a mix of sensitive interviews and deep reading' Financial Times, Books of the Year 2015

'Thanks to the selflessness of his final partner and the accomplishment of his biographer, he was blessed' The Sunday Times

'In the early 1960s it was impossible to believe that any sporting hero could be a homosexual... A Man's World: The Double Life of Emile Griffith tells of a fight with terrible consequences... The night boxer Emile Griffith answered gay taunts with a deadly cortege of punches.' --Guardian

'McRae does what few writers want to do these days... he takes himself out of the equation and simply tells the story, letting the intriguing cast of characters imbed themselves in our brain long after it's over... Highly recommended.'Boxing Scene

'A Man's World, the story of the troubled double life led by the former world welterweight and middleweight champion, the late Emile Griffith, is one of the most compelling books on boxing I have ever read.' --Alan Hubbard, FrankWarren.com

''I kill a man and most people forgive me. I love a man and many say this makes me an evil person.' That poignant quote is on the cover of Donald McRae's brilliant book, revealing the suffering Emile Griffith endured'The Sun

'Sensitively exploring Griffith's double life and delving deep into the worlds of sexuality and violence in 1960s America. McRae produces a triumph' --The Sunday Times Books of the Year 2015

Donald McRae is the award-winning author of eight books. He is one of only two authors to have won the prestigious William Hill award twice, for Dark Trade and In Black & White. As a journalist he has twice won Sports Interviewer of the Year - as well as winning Sports Feature Writer of the Year. He lives in Hertfordshire.