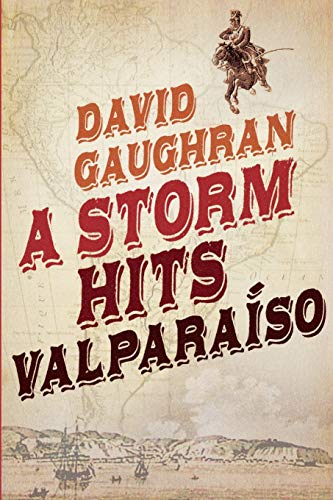 Catalina Flores de la Peńa's tongue got her in more trouble than any other part of her body, even though there were far more likely candidates. But when a storm rolls into her sleepy port town, she finds herself embroiled with a gang of adventurers, mercenaries, and prostitutes on a journey to free South America from the Spanish Empire. A Storm Hits Valparaíso is an epic, historical adventure starring two brothers torn apart by love; a slave running for his life; a disgraced British sailor seeking redemption; and José de San Martín, an Argentine general who deserts the Spanish Army to lead a bloody revolt against his former masters.

David Gaughran is a 34-year old Irish writer, living in Sweden, who spends most of his time travelling the world, collecting stories. He is the author of the South American historical adventure "A Storm Hits Valparaiso" and the short stories "If You Go Into The Woods" and "Transfection" as well as the popular self-publishing guide "Let's Get Digital: How To Self-Publish, And Why You Should". He runs the publishing blog Let's Get Digital and the South American history site South Americana, has a regular column at Indie Reader, and his work has been featured in the Huffington Post, The Sunday Times, and the Irish Times.

Book Description CreateSpace Independent Publishing Platform, 2012. Paperback. Condition: Used; Good. **SHIPPED FROM UK** We believe you will be completely satisfied with our quick and reliable service. All orders are dispatched as swiftly as possible! Buy with confidence!. Seller Inventory # 3363029

Book Description CreateSpace Independent Publishing Platform 2012-01-27, 2012. Paperback. Condition: Good. Item is in good condition. Some moderate creases and wear. This item may not come with CDs or additional parts including access codes for textbooks. Might be an ex-library copy and contain writing/highlighting. Seller Inventory # DS-146818203X-3

Book Description CreateSpace Independent Publishing Platform, 2012. Paperback. Condition: Used; Good. **Simply Brit** Shipped with Premium postal service within 24 hours from the UK with impressive delivery time. We have dispatched from our book depository; items of good condition to over ten million satisfied customers worldwide. We are committed to providing you with reliable and efficient service at all times. Seller Inventory # 2775504