Items related to Fire in the Thatch: A Devon Mystery (British Library... 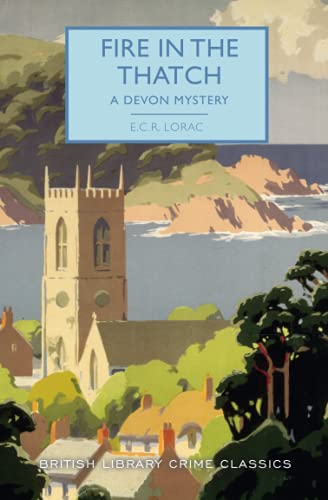 Mystery crime fiction written in the Golden Age of Murder

"Readers will enjoy watching the conflicts that arise between the wary country folk and the cocktail-drinking Londoners invading their habitat. In sum, this is jolly good fun." --Publishers Weekly

The Second World War is drawing to a close. Nicholas Vaughan, released from the army after an accident, takes refuge in Devon--renting a thatched cottage in the beautiful countryside at Mallory Fitzjohn. Vaughan sets to work farming the land, rearing geese and renovating the cottage. Hard work and rural peace seem to make this a happy bachelor life.

On a nearby farm lives the bored, flirtatious June St Cyres, an exile from London while her husband is a Japanese POW. June's presence attracts fashionable visitors of dubious character, and threatens to spoil Vaughan's prized seclusion.

When Little Thatch is destroyed in a blaze, all Vaughan's work goes up in smoke--and Inspector Macdonald is drafted in to uncover a motive for murder.

"An inherently gripping read from beginning to end, Fire in the Thatch is unreservedly recommended for community library Mystery/Suspense collections."--Midwest Book Review

"Lorac (the pen name of Edith Caroline Rivett) liberally sprinkles the narrative with red herrings and fairly presents all the potential clues. Readers will enjoy watching the conflicts that arise between the wary country folk and the cocktail-drinking Londoners invading their habitat. In sum, this is jolly good fun."--Publishers Weekly

E.C.R. LORAC was a pen name of Edith Caroline Rivett (1894-1958) who was a prolific writer of crime fiction from the 1930s to the 1950s, and a memberof the prestigious Detection Club. Her books have been almost entirely neglected since her death, but deserve rediscovery as fine examples of classic British crime fiction in its golden age.