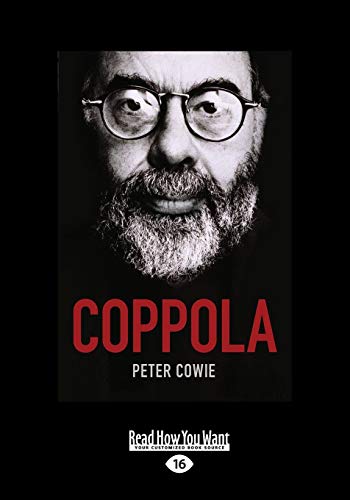 More than any other director, Francis Coppola exemplifies the drive and invention of modern American cinema. Acclaimed since his first Godfather movie in 1972, he went on to win the Palme d'Or at Cannes for The Conversation and to make an unforgettable impact on audiences worldwide with the gripping Vietnam War epic Apocalypse Now. Along with major blockbusters, he has also launched actors' careers including those of Nicholas Cage and Tom Cruise. Since the turn of the new millennium, Coppola has returned to his roots - to the low - budget, personal film, written and directed without the involvement of the major Hollywood studios. He has worked in Romania (for Youth without Youth), in Argentina (for Tetro), and in his home state of California for Twixt. But he also has encouraged the work of other talented film - makers - from his daughter Sofia (Lost in Translation, Marie Antoinette) to the Brazilian director Walter Salles (On the Road) and Robert De Niro (The Good Shepherd). In 2010 he was awarded his sixth Oscar - the Irving G. Thalberg Memorial Award. Aside from movies, the tireless Coppola has grown ever more committed to wine - making, earning acclaim for his Niebaum - Coppola range and opening a second winery in the Sonoma Valley. Talking exclusively to Peter Cowie for this updated edition of the biography, Coppola looks back on the past twenty years, and reflects on his much - cherished independence, as well as on the state of modern cinema.

PETER COWIE is a film historian who has written extensively on the work of Francis Coppola, and in particular The Godfather trilogy. He is the author of some 30 books (including biographies of Ingmar Bergman, Orson Welles and Louise Brooks, and Carlton's recent book on The Godfather) and was formerly International Publishing Director of the show-biz bible Variety.