Items related to The Secret Source: The Law of Attraction in One of...

Parfrey, Adam; D'Aoust, Maja The Secret Source: The Law of Attraction in One of Seven Hermetic Laws: Here are the Other Six

The Secret Source: The Law of Attraction in One of Seven Hermetic Laws: Here are the Other Six 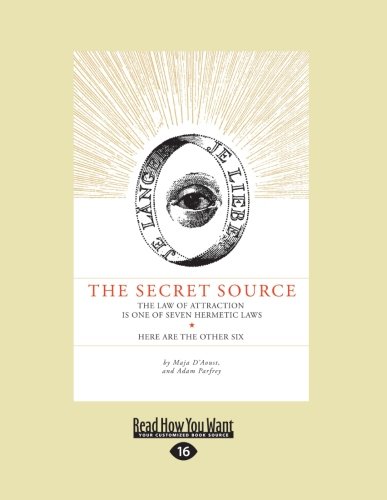 The Secret Source reveals the actual occult doctrines that gave birth to ''The Law of Attraction'' and inspired the media phenomenon known as The Secret.Why did The Secret divulge only one of the seven Hermetic Laws? What are the others, what do they say, and how could they enrich your life?The Secret Source provides the actual texts and fascinating stories behind the ''Emerald Tablet,'' the Kabbalistic treatise known as ''The Kybalion,'' and Manly P. Hall's essay on the occult movement that produced it.Maja D'Aoust lectures at the Philosophical Research Society; Adam Parfrey, editor of Apocalypse Culture, is writing a history of secret societies in America; and Jodi Wille is editing a book on the mystical commune known as ''The Source.'' Manly P. Hall is the author of The Secret Teachings of All Ages.