Items related to Party Animals: A Hollywood Tale of Sex, Drugs, and... 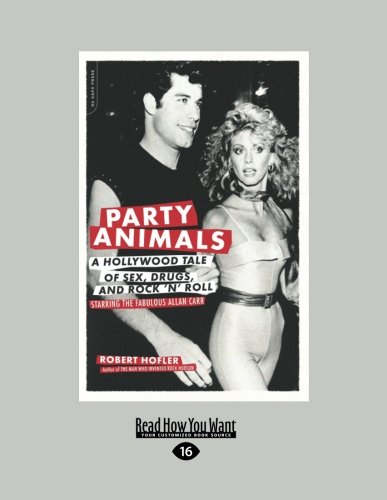 Allan Carr was Hollywoods premier party-thrower during the towns most hedonistic era the cocaine-addled, sexually indulgent 1970s. Hosting outrageous soirees with names like the Mick Jagger/Cycle Sluts Party and masterminding such lavishly themed opening nights as the Tommy/New York City subway premiere, it was Carr, an obese, caftan-wearing producer the ultimate outsider who first brought movie stars and rock stars, gays and straights, Old and New Hollywood together. From the stunning success of Grease and La Cage aux Folles to the spectacular failure of the Village Peoples Cant Stop the Music, as a producer Carrs was a rollercoaster of a career punctuated by major hits and phenomenal flops none more disastrous than the Academy Awards show he produced featuring a tone-deaf Rob Lowe serenading Snow White, a fiasco that made Carr an outcast, and is still widely considered to be the worst Oscars ever. Tracing Carrs excess-laden rise and tragic fall and sparing no one along the way Party Animals provides a sizzling, candid, behind-the-scenes look at Hollywoods most infamous period.

Q Syndicate, 3/8/10
“There’s not a lot of affection in Hofler’s biography of Allan Carr...But there is a lot of titillation...This candid, sometimes cruel account of hedonistic excess depicts the Hollywood that moral conservatives have nightmares about.”

Instinct, March 2010
“Ever wish you could step back into the hedonistic days of ’70s Hollywood? The sex, drugs, rock ’n’ roll of it all? Party Animals may be your safest bet to revisit those days...More than just juicy gossip, we also get a look at gay Hollywood in the ’70s.”

Booklist Online, 2/17/10
“Those who open Hofler’s biography of larger-than-life movie producer and party-giver Allan Carr, hoping for a closer look into decidedly decadent 1970s Hollywood, won’t be disappointed...Hofler is after more than mere trash. His book also affords a fascinating look at the movie business and a moving portrait of a talented, complicated, self-destructive man...Hofler captures Carr, warts and all.”

Lost Angeles Times, 5/20/10
“Deliciously dishy...Hofler tells his story like a catty fly on a wall...But he also gives the man his due...Hofler's unflinching portrayal of Carr...is an amazing ride through an era dripping with self-indulgence.”

HistoryWire.com, 5/18/10
“The story of Allan Carr's life is inevitably the story, as well, of a cocaine-addled, sexually indulgent era.”

Los Angeles Times, 5/20/10
“Deliciously dishy...Hofler tells his story like a catty fly on a wall, a very good choice. But he also gives the man his due...Hofler's unflinching portrayal of Carr...is an amazing ride through an era dripping with self-indulgence.” Times of Northwest Indiana, 6/20/10“Hoffler’s chronicle of the rise of big screen and Broadway producer Carr is...scandalous.”

EDGE Publications, 3/8/10
“Although Robert Hofler has written a biography, the trajectory reads like a classically schematic novel by Balzac or Stendhal...Hofler has spun a delicious tale of a Hollywood ego run amuck...For the most part, Hofler’s book is as engrossing as his subject...This is a book by a Hollywood insider for those who want to know what Hollywood is like on the inside. Like most such books, it isn’t very pretty, but it’s delicious. Movies and Broadway shows are indeed like sausages: tasty, but you don’t want to see how they’ve been made. In this case, however, you’ll eat it up.”

Bookgasm.com, 3/11/10
“[Carr’s] Hollywood parties were legendary for their excess, so there’s much to qualify as shocking...[Carr is] portrayed as compassionate, generous, giving and—psssst!—if you haven’t heard, gay as a tangerine.”
The Onion’s A.V. Club, 3/25/10
“Anyone with a taste for tales of Hollywood decadence will want to make a beeline for Party Animals...Party Animals is shamelessly entertaining—more so, in fact, than much of what Carr actually made.”

Goldmine, 4/9/10
“Hofler’s book is both a fun account of a man who enjoyed living large (in every sense of the word) and a poignant look at the pleasures and perils of excess.”

The John Shelton Ivany Top 21, 4/21/10
“Hofler shows how the overtly and proudly gay Carr broke Hollywood's barriers by brining together and celebrating the various sexual preferences of entertainment’s biggest stars. Chronicling Carr’s notorious reign over this excess-laden era, Hofler takes us behind-the-scenes to give us a detailed and intimate look at Hollywood in its heyday.”

Playbill, April 2010
“Hofler spares us few bumps on the way down (and on the way up, for that matter) in his new and properly tawdry tome.”
Internet Review of Books, March 2010
“Party Animals is a story of aesthetic over-indulgence...There are some juicy bits.”

Bookviews.com, April 2010
“Shows how the overtly and proudly gay Carr broke social barriers and is a detailed, intimate look at Hollywood in that era.”

wowOwow.com, 3/30/10
“The tome is peppered with juicy anecdotes; fabulous names are dropped on every page. It reads like one of those glamorous train-wreck bios on Judy or Marilyn. And for sure, Allan would take this as a compliment!...Party Animals is a trip back to not-so-long-ago times when it seemed the party would never end, and Allan Carr was the ringmaster of a circus world where anything could happen, and often did.”

January magazine, 3/29/10
“Seventies Hollywood excess is perfectly rendered in Party Animals...[Hofler] delivers a front row look at the crazy life that surrounded producer Allan Carr...If you enjoy tales from inside Hollywood, you’ll like Party Animals, even if you never knew much about Carr.”
Baltimore City Paper, 4/7/10
“The highs and lows of one man's life in the wickedly unforgiving entertainment industry...Party Animals offers an irresistible entry into some of the more decadent parties of one of the more decadent eras.”

Sacramento Book Review, May 2010
“Hofler uses interviews with celebrities and Carr’s high school friends to make readers feel as if they are walking through these excessive fetes. Party Animals captures the spirit of Allan Carr and hedonistic era of 1970s Hollywood. Just as Carr did for his productions and parties, Hofler leaves out no details.”

South Florida Gay News, 5/2/10
“This book has all of the trappings, both magical and troubled, of Hollywood.”

Chelsea Now and Gay City News, 4/30/10
“Will doubtlessly be on many a gay beach towel this summer, as it’s a succulently trashy read about the stage and screen impresario who just possibly might have done more coke than anyone else in Tinseltown...A total page-turner.”

EDGE Publications, 5/10/10
“Hofler provides a powerfully panoramic view of the ’70s, and its aesthetic avatar. Fast, furious, and full of jaw-dropping details, it’s a must-read for anyone with even a passing fascination with this dizzying decade of divine decadence.”
Camp, 3/4/10
“Truly riveting...One genuinely sizzling read... Hofler paints a vivid picture of a larger-than-life legend who had a great fall...An engrossing, fast-paced narrative. Included along the way are plenty of interesting bits of trivia...Stories, ranging from mild to wild, are skillfully interwoven throughout. (The chapters dedicated to “Can’t Stop the Music”—Allan’s no-holds-barred salute to disco, starring The Village People—could by themselves turn this book into an instant “peek behind the celebrity curtain” classic!)...A must-read for show queens, movie buffs, or anyone who experienced those free-wheeling post-Stonewall, pre-AIDS times (not to mention those who wish they had).”

PittsburghStageandScreenExaminer.com, 2/26/10
“Hofler examines the glittery life and drug-riddled excesses of the overtly gay Carr in delightfully delicious, almost sinful, detail. Carr’s was a notorious reign in an excess-laden era, and Hofler takes us behind-the-scenes, exposing scandal, sex and decadent sordid lives so sizzling and sordid you might want to reach for asbestos gloves.”

Beverly Hills Courier Pick of the Week, 3/5/10
“Riveting...A warts-and-more portrait of the indulgent ‘70s...Hofler’s is a welcomed assessment about a Disco Decade that was unforgettable...A juicy read of a time and a place.”

Kirkus Reviews, 12/15/09
“Hofler delivers a hell of a tour of Hollywood egotism, crassness and gross excess...[A] fast-paced, funny and occasionally horrifying portrait of a compulsive personality and the culture of excess that both created and destroyed him.”

Connecticut Post, 12/18/09
“[A] juicy biography...Hofler’s book will remind Hollywood that there was a lot more to this over-sized character than met the eye and that he is well worth remembering. The writer was able to talk with a wide array of people who were in Carr’s orbit for a while—from Stockard Channing to Jerry Herman and Ann-Margret to Arthur Laurents—and they have lots of interesting things to say.”

Robert Hofler has been Variety's New York-based theater reporter for over three years. Previously, he was a senior editor in Variety's Los Angeles office. He has also been an editor at Buzz, Life and Us magazines. His articles have appeared in the Los Angeles Times, Newsday, the Washington Post and Premiere magazine. He lives in New York City.