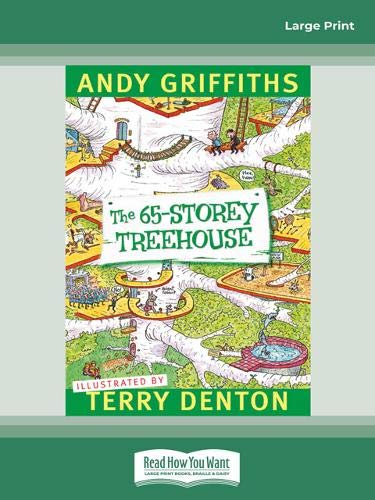 Andy and Terry's amazing 65 - storey treehouse now has a pet - grooming salon, a birthday room where it's always your birthday (even when it's not), a room full of exploding eyeballs, a lollipop shop, a quicksand pit, an ant farm, a time machine and Tree - NN: a 24 - hour - a - day TV news centre keeping you up to date with all the latest treehouse news, current events and gossip. Well, what are you waiting for? Come on up!

Laugh-out-loud wacky adventures in the world's most awesome treehouse! The fifth instalment in this hilarious and highly illustrated series will appeal to fans of Captain Underpants and Diary of a Wimpy Kid.

Andy Griffiths is Terry's best mate. He is also Australia's number one children's author! His books, including the popular Treehouse books, have been hugely successful internationally, winning awards and becoming bestsellers in the UK and the USA as well as in his homeland, Australia. The fourth Treehouse book, The 52-Storey Treehouse, won the Australian Book Industry Awards Book of the Year prize, the first children's book to ever do so. Andy thrives on having an audience: he has worked as a high school teacher, been the lead singer in a rock band and a stand-up comedian. He is a passionate advocate for literacy, has two daughters and lives in Melbourne, Australia.

Terry Denton is Andy's best mate. He is also a bestselling and award-winning writer and illustrator based in Melbourne, Australia. Among other things, he worked on the Horrible Science series for Scholastic UK. He lives by the beach with his wife and three kids.