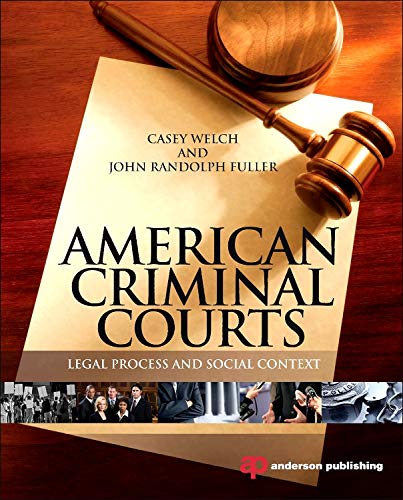 "Writing for undergraduate students in criminology, political science, sociology, or pre-law with no prior experience with the subject, Welch and Fuller introduce the structure and operations of the US criminal court system."-- Reference & Research Book News, October 2013

Casey Welch is an Associate Professor of Criminology and Sociology at Flagler College. He earned his Ph.D. and M.A. in Sociology from the University of Illinois at Urbana-Champaign. He earned his B.A. in Criminology and Law with a minor in Philosophy from the University of Florida. His research areas include social control, legal decision-making, homelessness, media, and pedagogy. He also works as a consultant with criminal court attorneys.

John Randolph Fuller brings both an academic and an applied background to his scholarship in criminology. Fuller received his Bachelor of University Studies degree from the University of New Mexico and his Master of Science and Doctor of Philosophy degrees from the School of Criminology at Florida State University. Fuller has taught at the University of West Georgia since 1981 and has been recognized by students as a superior teacher and advisor. In 1991 he was named the College of Arts and Sciences Faculty Member of the Year, and in 2001 he was given Professor of the Year Award by the Honors College. In addition to numerous journal articles and book chapters, Fuller has published six books on topics ranging from juvenile delinquency to peacemaking criminology. He is a frequent presenter at meetings of both the American Society of Criminology and the Academy of Criminal Justice Sciences. Additionally, he serves as the Faculty Ombuds at the University of West Georgia, where he endeavors to resolve conflicts for faculty, students, and administrators.