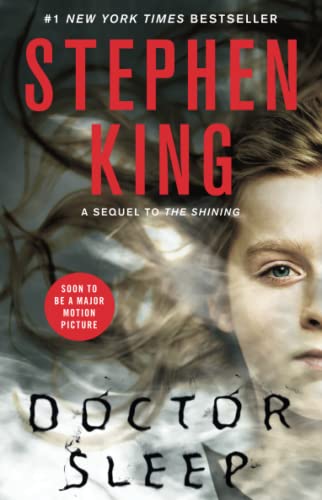 Soon to be a major motion picture starring Ewan McGregor!

From master storyteller Stephen King, his unforgettable and terrifying sequel to The Shining--an instant #1 New York Times bestseller that is "[a] vivid frightscape" (The New York Times). Years ago, the haunting of the Overlook Hotel nearly broke young Dan Torrance's sanity, as his paranormal gift known as "the shining" opened a door straight into hell. And even though Dan is all grown up, the ghosts of the Overlook--and his father's legacy of alcoholism and violence--kept him drifting aimlessly for most of his life. Now, Dan has finally found some order in the chaos by working in a local hospice, earning the nickname "Doctor Sleep" by secretly using his special abilities to comfort the dying and prepare them for the afterlife. But when he unexpectedly meets twelve-year-old Abra Stone--who possesses an even more powerful manifestation of the shining--the two find their lives in sudden jeopardy at the hands of the ageless and murderous nomadic tribe known as the True Knot, reigniting Dan's own demons and summoning him to battle for this young girl's soul and survival...

King's own supplies of creative steam show little sign of being depleted. (The Sunday Times)

A powerful sequel to The Shining

King finds a mode of the supernatural that has a melancholic beauty (Guardian, Book of the Week)

All the virtues of his best work (Margaret Atwood, New York Times)

A gripping, powerful novel, all the more so for being patently heartfelt (Financial Times)

Obviously a masterpiece, probably the best supernatural novel in a hundred years. (Peter Straub on The Shining)

STEPHEN KING returns to the characters and territory of one of his most popular novels ever, The Shining.