Items related to And This Too Shall Pass

Cador, Darrell Anthony And This Too Shall Pass

And This Too Shall Pass 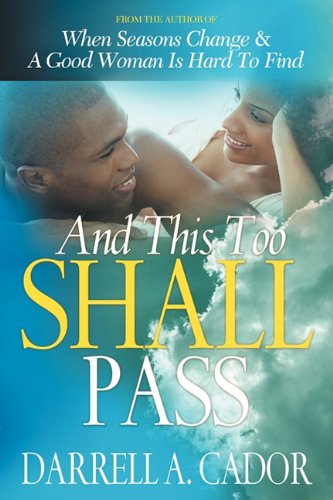 And This Too Shall Pass, the highly-anticipated 3rd release from author Darrell A. Cador (When Seasons Change and A Good Woman Is Hard To Find) is a powerful and moving collection of stories that speak to the pain often accompanied by love. A love that, many times, leads us to the point of no return.

You, Me, and She: Chance Johnston, a maintenance engineer at a local university enjoys the blessings of family life, and with his lovely wife Linda and daughter Toni at his side, nothing could be better. That is, until the seasonal demands of Linda's job begin to test their marriage, leaving Chance to search for an answer to his unsettling dilemma. An answer that comes in the person of Trudy Mitchell, a stunningly attractive student whose just enrolled at the university where Chance works, and quickly becomes his 'Teacher's Pet'. Torn between doing what's right, and doing what's right for him Chance's future hangs in the balance, forcing him to make the decision of a lifetime. A decision he'll either soon forget...or one he'll soon regret!

A Night In The Life: While enjoying a week-long getaway in South Beach Florida Brendan Minor, a marketing assistant for a DC-based advertising agency has a sensual encounter with Chelsea Dawkins, a beautiful and intriguing professional escort who proves to be far more than advertised. Ten years later, and ten years wiser Brendan is stunned to find that Chelsea has now relocated to the D.C. area. A startling find that reaches beyond past indiscretions, sending Brendan on an emotional journey to see if he and Chelsea have been fatefully reunited; or if the remnants of their distant past have finally caught up with them!

Hands Made To Hold: Terri Faulkner, an admin assistant for the city government simply wants the best that life and love have to offer. With sensitive ways and a caring heart Terri has been the consummate companion to Kendall Weathers, her significant of 4 years; and a man who'd give her the world and everything in it. Everything...except a way out of their turbulent relationship that's finally reached its breaking point, sending Terri on a mind-tingling race to find her inner strength, her independence, and ultimately herself before too little becomes too late! In the tradition of his two prior works, Darrell A. Cador's And This Too Shall Pass promises to deliver to readers what they've now come to expect; a book you simply can't put down!

1. And This Too Shall Pass

2. And This Too Shall Pass