Items related to A Manual for Cleaning Women: Selected Stories 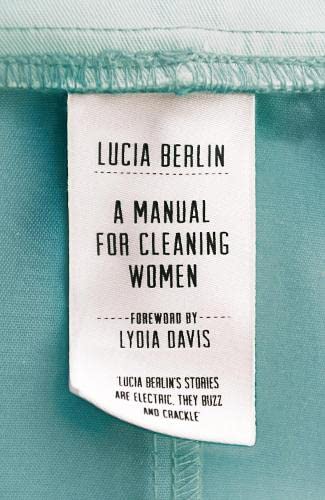 The stories in A Manual for Cleaning Women make for one of the most remarkable unsung collections in twentieth-century American fiction.

With extraordinary honesty and magnetism, Lucia Berlin invites us into her rich, itinerant life: the drink and the mess and the pain and the beauty and the moments of surprise and of grace. Her voice is uniquely witty, anarchic and compassionate. Celebrated for many years by those in the know, she is about to become - a decade after her death - the writer everyone is talking about. The collection will be introduced by Lydia Davis.

'With Lucia Berlin we are very far away from the parlours of Boston and New York and quite far away, too, from the fiction of manners, unless we are speaking of very bad manners . . . The writer Lucia Berlin most puts me in mind of is the late Richard Yates.' LRB, 1999

This selection of 43 stories . . . should by all rights see her as lauded as Jean Rhys or Raymond Carver. (John Self Independent)

In A Manual for Cleaning Women we witness the emergence of an important American writer, one who was mostly overlooked in her time. She is the real deal. (New York Times)

Lucia Berlin's collection of short stories, A Manual for Cleaning Women, deserves all of the posthumous praise its author has received . . . Her work is being comp­ared to Raymond Carver, for her similar oblique, colloquial style; her mordant humour; the recurrence of alcoholics; and her interest in the lives of working-class or marginalised people. But only Carver's very final stories share Berlin's eye for the sud­den exaltation in ordinary lives, or her ability to shift the tone of an entire story with an unexpected sent­ence. (Sarah Churchwell, 'Best Books of 2015' Guardian)

Some short story writers - Chekhov, Alice Munro, William Trevor - sidle up and tap you gently on the shoulder: Come, they murmur, sit down, listen to what I have to say. Lucia Berlin spins you around, knocks you down and grinds your face into the dirt. You will listen to me if I have to force you, her stories growl. But why would you make me do that, darlin'? . . . Berlin's stories are full of second chances. Now readers have another chance to confront them: bits of life, chewed up and spat out like a wad of tobacco, bitter and rich. (New York Times Book Review)

[Berlin's] stories are peopled with sharp, unpredictable, vital characters (often drunk!). They hit you with a force the moment you happen upon them. (Jackie Kay Observer)

The tone, worldly wise and somewhat regretful, is a sort of hardboiled domestic. When writing in this mode, Berlin is at her closest to Raymond Carver . . . Other writers she shares at least a little DNA with include Grace Paley and Barry Hannah. Occasionally . . . her beautiful, relentless, evocative prose echoes that of James Salter. (Guardian)

Berlin's stories . . . alternate between light and dark so seamlessly and suddenly that a certain emotion barely fades before you feel something abruptly different . . . The result is a fictional world of wide-ranging impact, a powerful chiaroscuro that manages to encompass the full spectrum of human experience . . . [Berlin] deserves to be ranked alongside Alice Munro, Raymond Carver, and Anton Chekhov. She excels at pacing, structure, dialogue, characterization, description, and every other aspect of the form. (The Boston Globe)

There is a seemingly effortless style to these beautifully observant tales of detoxing, lapsing and old affections. (Sunday Express)

This career-spanning volume should reward readers who return to it for months, years, even decades . . . Berlin's stories offer few answers, and no easy routes to redemption, but empathy pulses. (Max Liu Independent)

A chance to be let in on a great American secret