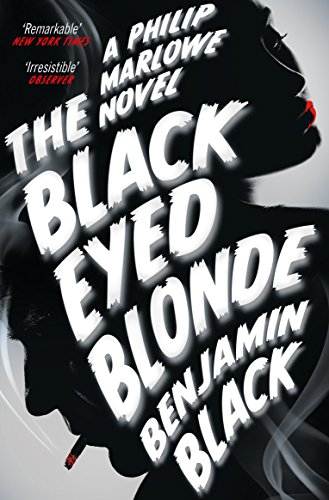 Soon Marlowe will find himself not only under the spell of the Black-Eyed Blonde; but tangling with one of Bay City s richest families and developing a singular appreciation for how far they will go to protect their fortune . . .

Somewhere Raymond Chandler is smiling, because this is a beautifully rendered hardboiled novel that echoes Chandler's melancholy at perfect pitch. The story is great, but what amazed me is how John Banville caught the cumulative effect Chandler's prose had on readers. It's hard to quantify, but it's also what separated the Marlowe novels from the general run of noir (which included some damn fine novelists, like David Goodis and Jim Thompson). The sadness runs deep. I loved this book. It was like having an old friend, one you assumed was dead, walk into the room. Kind of like Terry Lennox, hiding behind those drapes. (Stephen King)

Banville channeling Chandler is irresistible-a double whammy of a mystery. Hard to think anyone could add to Chandler with profitable results. But Banville most definitely gets it done. (Richard Ford)

John Banville's convincing imitation of Raymond Chandler's literary detective brings to mind an older Humphrey Bogart . . . The plot, though new, follows the master's hand . . . The Irish understudy takes on Chandler's habits convincingly . . .What Banville, through Black, brings to Chandler is perhaps an enhanced literary sensibility. His Marlowe is alert to nuances of language. (Mark Lawson Guardian)

The Black-Eyed Blonde includes winks and nods to ardent Chandler fans, but the book will work as first-rate noir for anyone . . . It's remarkable how fresh this book feels while still hewing close to the material on which it's based. The ill-fated Robert B. Parker experiment with Marlowe, "Poodle Springs," did entrust the Chandler legacy to a pro, but not the right one. Now to find a writer whose affinity for the genre has been so well established? And who seemed to be channeling Chandler even before he was asked to, while still maintaining a very identifiable, charismatic voice of his own? It's almost too good to be true. (New York Times)

Raymond Chandler could write some mean prose, the kind that hits like a highball and can knock you off your feet even when you're sitting down. Imitations always run the risk of coming off as a bad parody - like, say, that last sentence. But Black (a.k.a. novelist John Banville) has revived Chandler's legendary PI Philip Marlowe in a new adventure that reads almost as well as the real thing. A perfume heiress hires the shamus to investigate the disappearance of her lover, and the mystery soon opens up under him like a sinkhole. It's not just literary ventriloquism: Black manages to nail not only Marlowe's voice, but his soul. (Entertainment Weekly)

When I heard that Benjamin Black, aka the Man Booker-winner John Banville, had taken on the job, I felt the Chandler estate had plumped for the right man. Like Chandler, Banville sweats over his sentences. And although the avowed model for Banville/Black's crime fiction is Simenon, there is a great deal of Marlowe in his lonely, quixotic protagonist Quirke . . . The plot is dead right, and the voice is spot on too . . . that this novel is so enjoyable is a testament to the effectiveness of the formula that Chandler laboured so hard to perfect. (Daily Telegraph)

You might well be suspicious of the current trend for posthumous piggy-backing and I wouldn't blame you. But this one is the real deal, as sweet and bitter as the perfectly mixed gimlet . . . It takes a brilliant writer to make such an unreal character real: Chandler was and Banville is. It's a perfect match . . . Perhaps Chandler could have written a better Marlowe novel, but I can't think of anyone else who could. (Scotland on Sunday)

'Benjamin Black, author of the Quirke series of crime novels set in Dublin in the Fifties - aka Man Booker Prize-winning John Banville - reveals a knack for channelling the grand master of noir. . . Black ticks all the boxes - a man with a gun in his hand comes through the door more than once - and the set-pieces, which include an interview with a starlet on a back-lot and a visit to a creepy, swanky country club staffed by oddballs, are magnificent . . . More, please' (Evening Standard)

Banville lets us know from the very start of The Black-Eyed Blonde that we are in the safest of hands here . . . Banville has largely perfected Chandler's much-mimicked, seldom-bettered knack for similes and one-liners. Best of all, though, he conjures the world-weary loneliness of Chandler's creation, a character who, in just seven novels, the world saw far too little of. Banville/Black clearly loves writing this and the fun he's having - his affection for Chandler's world - shines through. An exceptionally effective act of literary ventriloquism and entirely irresistible. (Observer)

If anything, oddly, the book is probably better than an actual Chandler: more coherent, and more consistent, more careful. Banville is simply a more elegant writer. Chandler was a metaphorical rogue trader; Banville is a class act . . . This is perfect Mr Banville. (New Statesman)

Benjamin Black is the pen name of acclaimed author John Banville, who was born in Wexford, Ireland, in 1945. His novels have won numerous awards, including the Man Booker Prize in 2005 for The Sea. He lives in Dublin. Benjamin Black is the author of the Quirke series which has been adapted for BBC television, starring Gabriel Byrne.