Items related to Queen Elizabeth II: Her Life in Our Times

Bradford, Sarah Queen Elizabeth II: Her Life in Our Times

Queen Elizabeth II: Her Life in Our Times 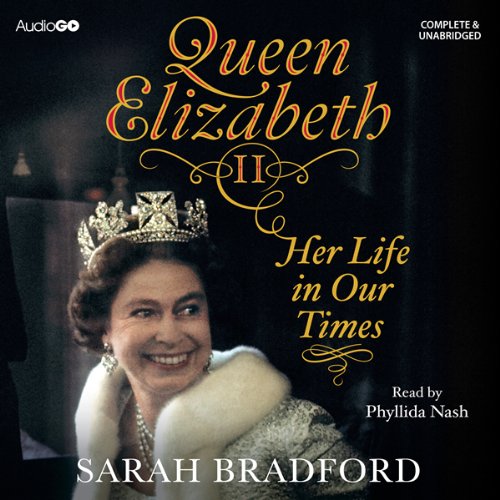 The Queen's story is our history: she was not born to be Queen but, a media star since the age of three, she has been the most famous woman in the world for all of our lives. In this definitive account, acclaimed Royal author Sarah Bradford offers a vivid window into the key moments of British and world history during the Queen's sixty-year reign, a mixture of happiness and crisis, but one defined by her extraordinary love and commitment to Britain and the Commonwealth. Drawing on a unique collection of archives and interviews, interwoven with the latest research, she gives us fascinating insights into Royal life, from wars and political scandal, to the death of Diana and the triumph of Prince William's wedding to Catherine Middleton. This is the biography the Queen deserves: remarkable, warm and, above all, inspiring.

Sarah Bradford is a historian and biographer. Her books include Cesare Borgia (1976), Disraeli (1982), winner of the New York Times Book of the Year, Princess Grace (1984), Sacherevell Sitwell (1993), Elizabeth: A Biography of Her Majesty the Queen (1996), America's Queen: The Life of Jacqueline Kennedy Onassis (2000), Lucrezia Borgia (2005) and Diana (2007). She frequently appears on television as an authority on her biographical subjects and as a commentator on notable royal events. She is currently working on a full scale biography of Queen Victoria. She lives in London.

1. Queen Elizabeth II: Her Life in Our Times

Book Description Paperback. Condition: Very Good. The book has been read, but is in excellent condition. Pages are intact and not marred by notes or highlighting. The spine remains undamaged. Seller Inventory # GOR008037853

2. Queen Elizabeth II: Her Life in Our Times