Items related to Jack the Ripper: The Definitive Casebook

Jack the Ripper: The Definitive Casebook 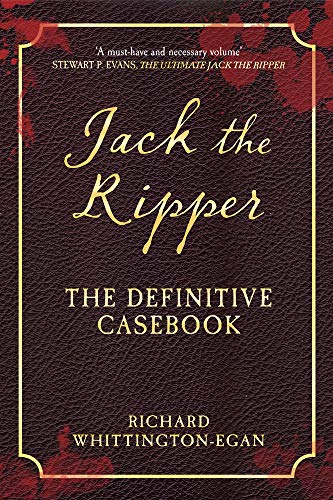 The case of Jack the Ripper and his savage serial killing and horrendous mutilation of five women in the East End of Victorian London is the greatest of all unsolved murder mysteries. For over 100 years the long line of candidates for the bloodstained laurels of Jack the Ripper has been paraded before us. Policemen and Ripperologists have tried in vain to put a name to the faceless silent killer. Richard Whittington-Egan, one of the founding fathers of the search, published, in 1975, his Casebook on Jack the Ripper, now eagerly sought but long out of print and virtually unobtainable (except at mammoth prices), in which he documented the history, the crimes, the investigations and the investigators. He also included some fundamentally new discoveries and points, such as the real story of the kidney in Mr Lusk's renal post-bag, wrongly said to be that of Catherine Eddowes (Ripper Victim No. 4). The endless nightmare of Jack the Ripper has rolled on, unstoppable, and now Richard Whittington-Egan, in a completely revised and very considerably enlarged edition of the 1975 Casebook, has taken a new look, from a longer perspective, at the theories and the personages who advanced them, from the time of the murders right up to the present day.

Long regarded as one of the 'fathers of modern Ripperology', Mr Whittington-Egan has many years' association with the subject and this long awaited expansion and update of his seminal work on Ripper literature has been much anticipated. In a field where there are many books constantly published, this is a must-have and necessary volume for the Ripper researcher, historian and enthusiast alike. It is a valuable and necessary guide to the published works in a subject that can perplex even the most informed of readers. Amberley have produced here a book that will fill a gap in Ripper publishing that only a writer of Mr Whittington-Egan's calibre could fill. This is not merely another Ripper volume - it is an investment for anyone with an interest, at whatever level, in the Whitechapel murders of 1888. STEWART P. EVANS, author of The Ultimate Jack the Ripper Richard Whittington-Egan is one of the Grand Masters of 'Ripperology'. A long time commentator, not an innovator, as he himself has said, his new book, Jack the Ripper: The Definitive Casebook, is a masterly distillation of the facts and theories that have built up over the past half century. The public fascination with the Ripper shows no signs of abating and for anyone coming new to this subject or indeed, for the older Ripperologists who may have missed a theory or two, this book is an absolute must. DON RUMBELOW, author of The Complete Jack the Ripper --Don Rumbelow

Richard Whittington-Egan has been pursuing the study of Jack the Ripper for longer than anyone else alive. As a young boy, he talked to old people who had lived through the Ripper's activities and were then still living in the East End. Richard spent thirty years as a journalist with Associated Newspapers (Daily Mail) and is a well-respected true crime writer. His previous books include Tales of Liverpool Murder, Mayhem and Mystery, The Bedside Book of Murder, The Great British Torso Mystery and Murder Files. He has also acted as reader and adviser on crime books to Little, Brown, and Penguin Books, and as a reviewer for The Times, the New York Times, and the London Evening Standard among others. He lives in Great Malvern.

1. Jack the Ripper: The Definitive Casebook

Book Description -. Hardcover. Condition: Very Good. Jack the Ripper: The Definitive Casebook This book is in very good condition and will be shipped within 24 hours of ordering. The cover may have some limited signs of wear but the pages are clean, intact and the spine remains undamaged. This book has clearly been well maintained and looked after thus far. Money back guarantee if you are not satisfied. See all our books here, order more than 1 book and get discounted shipping. Seller Inventory # 7719-9781445617688

2. Jack the Ripper: The Definitive Casebook

3. Jack the Ripper: The Definitive Casebook

Book Description Amberley Publishing 2013-10-15, 2013. Hardcover. Condition: Very Good. Item is in very good condition. If supplemental codes/CDs for textbooks are required please contact us prior to purchasing as they may be missing. Seller Inventory # DS-1445617684-2

4. Jack the Ripper: The Definitive Casebook

5. Jack the Ripper: The Definitive Casebook

Book Description Amberley Publishing, 2013. Condition: Good. A+ Customer service! Satisfaction Guaranteed! Book is in Used-Good condition. Pages and cover are clean and intact. Used items may not include supplementary materials such as CDs or access codes. May show signs of minor shelf wear and contain limited notes and highlighting. Seller Inventory # 1445617684-2-4