Items related to The Extremist: A pacey, dramatic action-packed thriller... 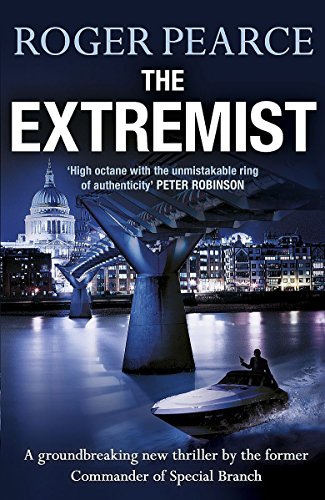 In a race down the Thames, Detective Chief Inspector John Kerr is caught in a fight ot the death with two gold smugglers.
The American wife of the British Defence Secretary is brutally murdered while walking her dog. A senior judge is executed in Middle Temple Lane.
Blocked by 'affirmative inaction' at New Scotland Yard and threats from MI6, Kerr deploys a talented female operative undercover to force the truth.
A dirty bomb attack proves the motive is hatred of the United States and the special relationship. But is this domestic extremism or the work of foreign spies?
As attacks escalate, Kerr confronts treachery and corruption from his own side and resorts to action as extreme as the dark forces turned against him.

'The high-octane action begins on page one and doesn't let up until the end. A top-notch thriller with the unmistakeable ring of authenticity.' (Peter Robinson)

'It's a tribute to Roger Pearce's ability that the plot never becomes inpenetrable and there's an uncomfortable authenticity as real-life operations are referenced... a breathless, hurtling page-turner.' (Financial Times)

'Vividly written and delivering a glimpse of what counter-terrorism feels like, it's a highly promising start from a writer who could well have a big future.' (Daily Mail)

A groundbreaking new voice in fiction

Buy Used
Condition: Good
Ships from the UK. Shows some signs... Learn more about this copy

Book Description Coronet, 2013. Condition: Good. Ships from the UK. Shows some signs of wear, and may have some markings on the inside. Seller Inventory # GRP101667149

Book Description Coronet, 2013. Hardcover. Condition: Good. Ex-Library Book. Has usual library markings and stamps inside. All orders are dispatched the following working day from our UK warehouse. Established in 2004, we have over 500,000 books in stock. No quibble refund if not completely satisfied. Seller Inventory # mon0004387702

Book Description Coronet, 2013. Hardcover. Condition: Good. Ex library copy with usual stamps/stickers Good condition is defined as: a copy that has been read but remains in clean condition. All of the pages are intact and the cover is intact and the spine may show signs of wear. The book may have minor markings which are not specifically mentioned. Most items will be dispatched the same or the next working day. Seller Inventory # mon0012053774

Book Description Paperback. Condition: Good. The book has been read but remains in clean condition. All pages are intact and the cover is intact. Some minor wear to the spine. Seller Inventory # GOR005974439

Book Description Paperback. Condition: Fair. A readable copy of the book which may include some defects such as highlighting and notes. Cover and pages may be creased and show discolouration. Seller Inventory # GOR008963386

Book Description Paperback. Condition: Very Good. The book has been read, but is in excellent condition. Pages are intact and not marred by notes or highlighting. The spine remains undamaged. Seller Inventory # GOR005043344