Items related to The Kill Zone 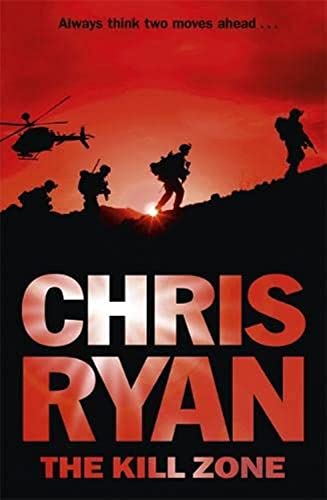 The guys in the Regiment know they face their fiercest enemies when they fight the Taliban. No-one is tougher, more deadly - or more cunning. And if they enter the Taliban's kill zone, they know just what to expect...

When three deadly Stinger missiles go missing in Helmand Province, the Regiment is tasked to retrieve the weapons at all costs. SAS legend Jack Harker has to lead an eight-man mission into a suspected Taliban facility. He's suspicious about what the aims of the mission really are - and it's about to go noisy.

Meanwhile, in Belfast, Siobhan Byrne, a highly trained surveillance operative, is infiltrating the drug crew of a former IRA commander. But are her motives professional or personal? Even she doesn't know any more.

Neither Jack nor Siobhan can guess just how closely linked their operations are about to become, or just what's at stake. But as the President of the United States makes plans to visit the UK, a devastating plot unfolds.

A shockingly authentic tale to keep your adrenalin pumping as fast as the blood on the pages. (Sun)

Nobody takes you to the action better than Ryan, because he's the real deal, and this muscle-and-bone thriller will have fans' blood pumping. (Evening Standard)

Chris Ryan is as hard as nails. (Mirror)

Book Description Hodder & Stoughton, 2010. Condition: Good. Shows some signs of wear, and may have some markings on the inside. Seller Inventory # 9310016-6

Book Description Coronet, 2010. Paperback. Condition: Used; Good. Dispatched, from the UK, within 48 hours of ordering. This book is in good condition but will show signs of previous ownership. Please expect some creasing to the spine and/or minor damage to the cover. Aged book. Tanned pages and age spots, however, this will not interfere with reading. Damaged cover. The cover of is slightly damaged for instance a torn or bent corner. Seller Inventory # CHL6183675

Book Description Hodder & Stoughton, 2010. Condition: Good. A+ Customer service! Satisfaction Guaranteed! Book is in Used-Good condition. Pages and cover are clean and intact. Used items may not include supplementary materials such as CDs or access codes. May show signs of minor shelf wear and contain limited notes and highlighting. Seller Inventory # 1444710257-2-4

Book Description Hodder & Stoughton, 2010. Condition: Good. Ships from the UK. Former Library book. Shows some signs of wear, and may have some markings on the inside. Seller Inventory # GRP22158519

Book Description Coronet 16/09/2010, 2010. Condition: Good. Will be shipped promptly from UK warehouse. Book is in good condition with no missing pages, no damage or soiling and tight spine. There may be some dog-eared pages showing previous use but overall a great book. Seller Inventory # 9053-9781444710250

Book Description Coronet 16/09/2010, 2010. Condition: Very Good. Shipped within 24 hours from our UK warehouse. Clean, undamaged book with no damage to pages and minimal wear to the cover. Spine still tight, in very good condition. Remember if you are not happy, you are covered by our 100% money back guarantee. Seller Inventory # 6545-9781444710250

Book Description Coronet 16/09/2010, 2010. Condition: Very Good. This book is in very good condition and will be shipped within 24 hours of ordering. The cover may have some limited signs of wear but the pages are clean, intact and the spine remains undamaged. This book has clearly been well maintained and looked after thus far. Money back guarantee if you are not satisfied. See all our books here, order more than 1 book and get discounted shipping. . Seller Inventory # 7719-9781444710250

Book Description Hodder and Stoughton, 2010. Paperback. Condition: Used; Good. **Simply Brit** Shipped with Premium postal service within 24 hours from the UK with impressive delivery time. We have dispatched from our book depository; items of good condition to over ten million satisfied customers worldwide. We are committed to providing you with reliable and efficient service at all times. Seller Inventory # mon0001657037