Items related to Lloyd George and the Appeasement of Germany, 1919-1945

Stella Rudman Lloyd George and the Appeasement of Germany, 1919-1945 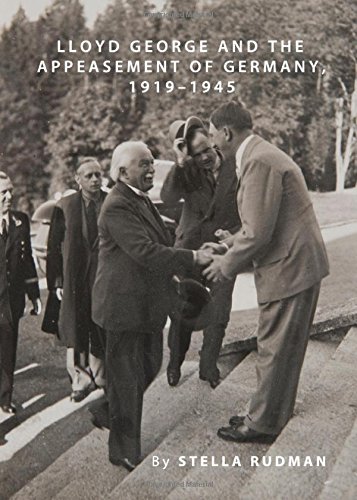 This book examines Lloyd George s attitudes to Germany during the inter-war period and beyond. As Prime Minister until October 1922 and a leading player in the shaping of postwar Europe, Lloyd George maintained an active critical interest in Britain s European policy almost until his death in 1945. After a brief survey of his role at the Paris Peace Conference of 1919, the book considers Lloyd George s policy towards Germany during the rest of his premiership. It then examines his interventions across the remaining inter-war years, concluding with an evaluation of his advocacy of a compromise peace with Hitler during World War Two. In 1941 Churchill likened Lloyd George s attitude to Germany to that of Marshal Pétain. The evidence in some ways vindicates that comparison. It shows that, after 1918, Lloyd George supported appeasement on most issues involving Germany even during Hitler s chancellorship, and even after World War Two began. His belief that Germany had just grievances, his suspicion of French motives, his admiration for Hitler and his growing conviction that Germany had been treated unfairly at Versailles, led him to see her as a long-suffering under-dog. The book also sheds light on the evolution of the appeasement policies of successive British governments throughout the inter-war period; and, by comparing Lloyd George s views with those of contemporary leaders and opinion-formers, it highlights ideas for alternatives to appeasement as conceived at the time rather than by historians in hindsight.

"Readable and absorbing, Rudman's book focuses on a period in Lloyd George's life which apparently has been largely overlooked by historians. It does admirably what all doctoral studies should do and that is, explore avenues of enquiry where few if any other observers have ventured before, thus revealing truths hitherto only dimply perceived, or not perceived at all.Through copious research, mainly into original source material as shown in the bibliography -- the author gradually reveals the psychology behind Llyod George's appeasement of Germany and examines its consequences during the crucial twenty-six year period of history covered in this book. The results provide important insights into the many factors which can propel nations into war."- Phillip Taylor MBE & Elizabeth Taylor of Richmond Green Chambers, 2011"Unlike full-scale Lloyd George biographers, including the most recent, Roy Hattersley, Rudman does not reach her subject's later years in a state of exhaustion. Instead, she draws on the high phase of his political career as a means of adding colour and depth to her convincing portrait of the elder statesman."- Will Robinson, Times Literary Supplement, 7 October, 2011'The author has done those interested in Lloyd George's career a service by amassing this material and presenting it cogently.' - Susan Pedersen, Columbia University, in The Historian'Rudman's account is readable and generally well-reasoned.' - Chris Cooper, 'Journal of Liberal History, 77 (2012), 72-73, p. 73.

Stella Rudman has recently obtained a PhD in History with the Open University. Her research speciality is British foreign policy between the two World Wars, particularly British Government attitudes to Germany and France. She is currently working on a study of Austen Chamberlain s European policy.