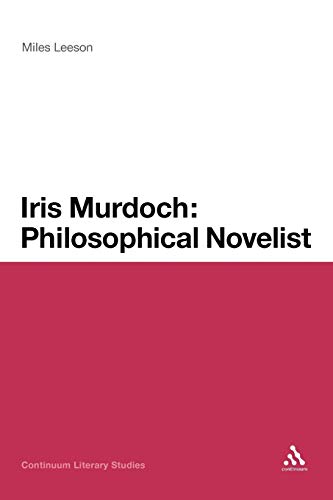 "It is a sign of health in a scholarly community when books arise that challenge its orthodoxies. Such challenge requires bravery of the scholar and meticulous care in arguing for new approaches. Leeson's book is brave and healthy in this way, aiming to open new lines of research and inquiry into Iris Murdoch 's novels as, precisely, philosophical novels. Not novels in which philosophy is a motif (the orthodoxy), but in which philosophy is, in fact, done. Recent gestures by other scholars in Murdoch Studies indicate that such a line of counter-criticism has been opened, notably by the work of Bran Nicols and Guy Backus, though not settled. Leeson's book extends that line to firmly establish that Murdoch's novels do philosophy, and to open space for explorations of the depth to which her philosophy is woven into her aesthetic fabric... There is much inspiration to be found here, and Leeson has established himself as young scholar of both depth and promise." -M. F. Simone Roberts, author of Irish Murdoch and the Moral Imagination: Essays (McFarland & Co Inc, 2010)

Miles Leeson is Lecturer in English Literature at the University of Portsmouth, UK.