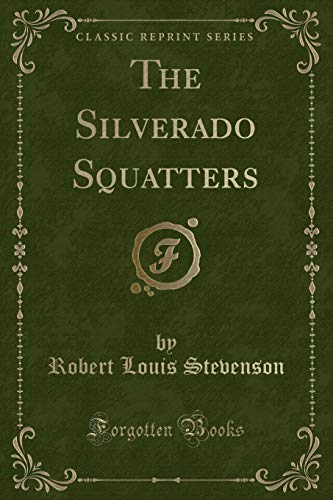 THE
SILVERADO SQUATTERS.
The scene of this little book is on a high mountain. There are, indeed, many higher ; there are many of a nobler outline. It is no place of pilgrimage for the summary globe-trotter; but to one who lives upon its sides, Mount Saint Helena soon becomes a centre of interest. It is the Mont Blanc of one section of the Californian Coast Eange, none of its near neighbours rising to one-half its altitude. It looks down on much green, intricate country. It feeds in the spring-time many splashing brooks. Prom its summit

Forgotten Books' Classic Reprint Series utilizes the latest technology to regenerate facsimiles of historically important writings. Careful attention has been made to accurately preserve the original format of each page whilst digitally enhancing the difficult to read text. Read books online for free at www.forgottenbooks.org

Robert Louis (Balfour) Stevenson was a prolific Scottish poet and novelist in the 19th century. He was admired by many other authors, and his work includes The Black Arrow, Kidnapped, and The Strange Case of Dr. Jekyll and Mr. Hyde. He died in 1894.

Book Description Paperback. Condition: New. Print on Demand. Excerpt from The Silverado Squatters. About the Publisher, Forgotten Books publishes hundreds of thousands of rare and classic books. This book is a reproduction of an important historical work. Forgotten Books uses state-of-the-art technology to digitally reconstruct the work, preserving the original format whilst repairing imperfections present in the aged copy. In rare cases, an imperfection in the original, such as a blemish or missing page, may be replicated in our edition. We do, however, repair the vast majority of imperfections successfully; any imperfections that remain are intentionally left to preserve the state of such historical works. This text has been digitally restored from a historical edition. Some errors may persist, however we consider it worth publishing due to the work's historical value. The digital edition of all books may be viewed on our website before purchase. print-on-demand item. Seller Inventory # 9781440065422_0