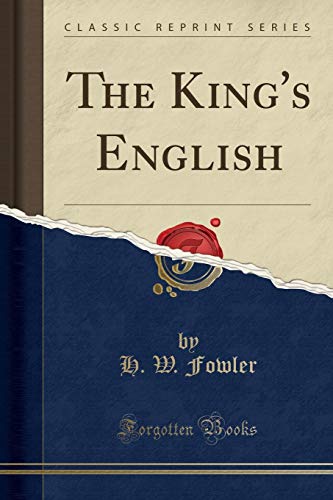 The plan of the book was dictated by the following considerations. It is notorious that English writers seldom look into a grammar or composition book; the reading of grammars is repellent because, being bound to be exhaustive on a greater or less scale, they must give much space to the obvious or the unnecessary; and composition books are often useless because they enforce their warnings only by fabricated blunders against which every tiro feels himself quite safe. The principle adopted here has therefore been (i) to pass by all rules, of whatever absolute importance, that are shown by observation to be seldom or never broken; and (2) to illustrate by living examples, with the name of a reputable authority attached to each, all blunders that observation shows to be common. The reader, however, who is thus led to suspect that the only method followed has been the rejection of method will find, it is hoped, a practical security against inconvenience in the very full I ndex.
(Typographical errors above are due to OCR software and don't occur in the book.)

Fowler was for 17 years a teacher at Sedbergh School. He then lived and worked in London as a freelance writer for four years, before going to Guernsey to form a remarkable successful writing partnership with his brother Francis. Described by one of his pupils at Sedbergh as 'a man of great fastidiousness (moral and intellectual)', Fowler was a private scholar and keen sportsman, living a simple life in Guernsey, yet his remarkable guide to English usage has become one of the most celebrated reference books of the twentieth century.