Items related to Mcallister and His Double (Classic Reprint)

Mcallister and His Double (Classic Reprint) 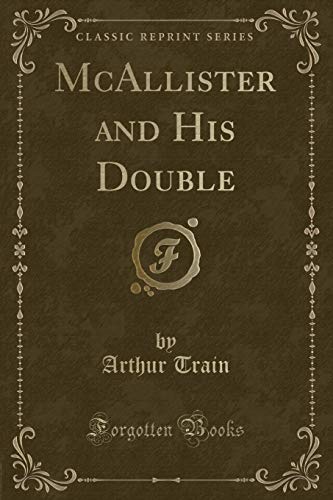 Mc Allister whispered sharply in his ear .. Frontispiece FACING PACK What do you know about it? I tell you its all rot! 6T hrow up your hands !lo Do you know who youve caught? i6 Merry Christmas, Fatty! 24 I think youve got Raffles whipped to a standstill. 64 You think you re a sure winner. But I know you. I know your face, 88 Wot do you want? drawled the fat man, blinking at the lantern 102 Who in thunder are you? no Deftly tied the two ends of string around it. .. .130 Hands up, or Ill shoot! yelled the detective, as a fat, wild-eyed individual sprung from within ..
(Typographical errors above are due to OCR software and don't occur in the book.)

Arthur Cheney Train (6 September 1875 – 22 December 1945), also called Arthur Chesney Train, was an American lawyer and writer of legal thrillers, particularly known for his novels of courtroom intrigue and the creation of the fictional lawyer Mr. Ephraim Tutt. Train was born in Boston, Massachusetts. His father was lawyer Charles Russell Train, who served for many years as attorney general of Massachusetts, and his mother was Sara Maria Cheney. Train graduated with a BA from Harvard University in 1896 and LLB from Harvard Law School in 1899.

1. McAllister and His Double (Classic Reprint)