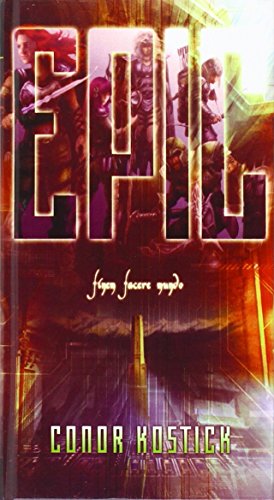 Welcome to a society governed through computer games!

On New Earth, society is governed and conflicts are resolved in the arena of a fantasy computer game, Epic. If you win, you have the chance to fulfill your dreams; if you lose, your life both in and out of the game is worth nothing. When teenage Erik dares to subvert the rules of Epic, he and his friends must face the Committee. If Erik and his friends win, they may have the key to destroying the Committee s tyranny. But if they lose . . .
Watch a QuickTime trailer for this book.

Conor Kostick was a designer for the world s first live fantasy role-playing game, based in Peckforton Castle, Cheshire. He is the author of the Epic Trilogy -- Epic, Saga, and Edda (all available from Firebird). He lives in Dublin where, having completed a Ph.D on the subject of the crusades, he now teaches medieval history at Trinity College Dublin. He has published widely on history, culture, and politics, including coauthoring The Easter Rising: A Guide to Dublin in 1916, and co-editing Irish Writers Against War, an anthology of writings by Irish authors in response to the war in Iraq. He has twice been elected chairperson of the Irish Writers Union."