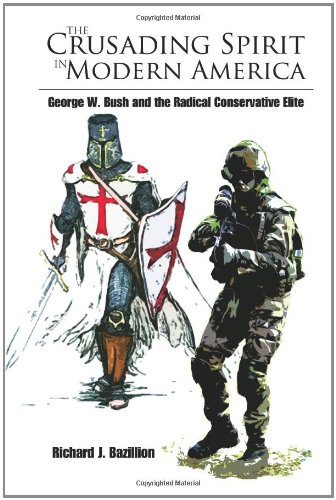 The Crusading Spirit in Modern America examines the ideological underpinnings of George W. Bush's presidency. Among the historical antecedents of Bush's foreign policy were the medieval Crusades, which resonate today in the confrontation between Islam and the West.The neo-conservative drive to establish American global hegemony owes a great deal to the crusading spirit of past centuries. Karl Rove, Bush's main political strategist, mobilized evangelic Christians in support of a "war on terror" intended, by the neo-conservatives, to establish a peculiar form of democracy in the Middle East. The idea to fight a preventive war against Iraq in 2003 originated in the neo-conservative vision of American global supremacy. The book therefore explores the genesis of neo-conservatism and the means by which its adherents gained control of strategic planning in the Defense department. A significant part of the story concerns neo-conservative attitudes toward Israel and the role these considerations played in formulating American foreign policy. The neo-conservative elite has been identified, observed, and studied by several scholars in recent years, but not from the broader perspective of modern history. In this context, the German origins of neo-conservative thought are germane to any analysis of its character. By taking this longer view, it is possible to understand just how deeply neo-conservatism has infected strategic thinking and to discover how its influence can be curbed in the future. The foregoing comments raise the issue of Bush's presidential legacy. Neo-conservative doctrine led Bush to commit acts which violated the U.S. Constitution and various international treaties. His domestic policies caused the deregulation, fiscal irresponsibility, and crony capitalism which brought about the current economic crisis. Whether Bush and Cheney should have been impeached is a question which must be answered if their malign legacy is to be transcended. The nature of radical conservatism, and the record of its adherents while in office, are matters of extreme importance to Americans and to the rest of the world.

Richard J. Bazillion spent thirty-two years in higher education, in Canada and the United States. Though born in Canada, he is a citizen of both countries. His specialty is the history of modern Germany, on which he has published a book and numerous articles.For many years, he served as professor of history and library director in Canadian and U.S. universities. He has written extensively on the design and construction of academic library buildings. He holds a Ph.D. from the University of Wisconsin--Madison and now makes his home in Calgary, Alberta.