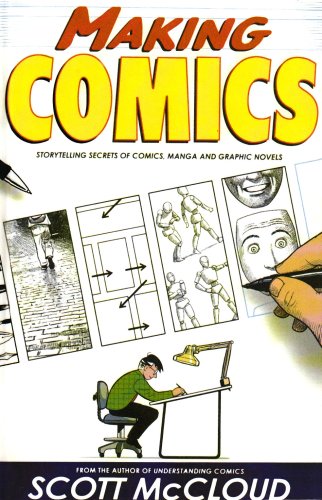 Scott McCloud tore down the wall between high and low culture in 1993 with Understanding Comics, a massive comic book about comics, linking the medium to such diverse fields as media theory, movie criticism, and web design. In Reinventing Comics, McCloud took this to the next level, charting twelve different revolutions in how comics are generated, read, and perceived today. Now, in Making Comics, McCloud focuses his analysis on the art form itself, exploring the creation of comics, from the broadest principles to the sharpest details (like how to accentuate a character's facial muscles in order to form the emotion of disgust rather than the emotion of surprise.) And he does all of it in his inimitable voice and through his cartoon stand–in narrator, mixing dry humor and legitimate instruction. McCloud shows his reader how to master the human condition through word and image in a brilliantly minimalistic way. Both comic book devotees and the uninitiated will marvel at this journey into a once–underappreciated art form.

“In this, McCloud’s third nonfiction book about comics, he has produced his most significant achievement to date, and that’s really saying something.” (Cory Doctorow)

“Only Scott McCloud could have organized his thoughts on comics like this. Scott’s talent as a cartoonist not only makes him intimate to insights no outsider can see, but also gives him the power to show it to the world.” (Jeff Smith)

“Every aspect of comics creation is covered in this enlightening, accessible guide presented in a comic-strip format.” (Booklist (Editor's Choice))

“A guide to creating comics that is as thoughtful and entertaining as the best-loved work in the field, both enjoyable and accessible to casual fans of the form and the new gold standard for artists who want to create their own comics, manga, and graphic novels. (Bookslut)

“More than a how-to, the book goes beyond simple instruction, digging into the real dirt of creating comics.” (Kirkus Reviews)

Book Description HarperCollins Publishers, 2008. Condition: Good. A+ Customer service! Satisfaction Guaranteed! Book is in Used-Good condition. Pages and cover are clean and intact. Used items may not include supplementary materials such as CDs or access codes. May show signs of minor shelf wear and contain limited notes and highlighting. Seller Inventory # 1435261941-2-4

Book Description HarperCollins Publishers, 2008. Condition: GOOD. Has little wear to the cover and pages. Contains some markings such as highlighting and writing. Seller Inventory # 1435261941_abe_gd

Book Description 2008-04-18, 2008. Library Binding. Condition: Good. Item is in good condition. Some moderate creases and wear. This item may not come with CDs or additional parts including access codes for textbooks. Might be an ex-library copy and contain writing/highlighting. Seller Inventory # DS-1435261941-3

Book Description HarperCollins Publishers, 2008. Condition: VERY GOOD. Pages are intact and are not marred by notes or highlighting, but may contain a neat previous owner name. The spine remains undamaged. Seller Inventory # 1435261941_abe_vg