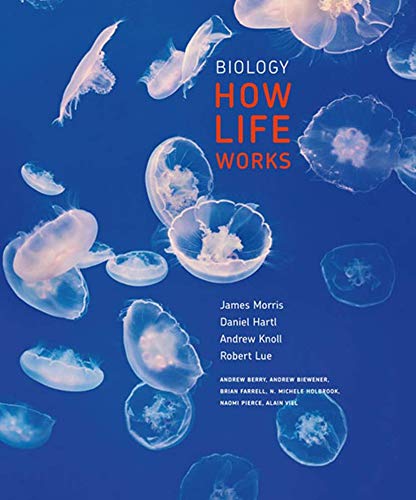 "I think the best selling point is that the text focuses on helping students make connections between the sub-fields of biology." - Cindee Giffen, University of Wisconsin-Madison, USA

"I really like the streamlined approach and emphasis on ideas and concepts rather than details and facts." - Scott Solomon, Rice University, USA

"I love love love the integration throughout of evolution and real case studies. Very powerful." - Rebecca Safran, University of Colorado at Boulder, USA

[on the Visual Synthesis Map] "My initial reaction was 'wow.' It helped me visualize the spatial relationships associated with information flow at the cellular level, and I think it is thus likely to really help undergraduates." - Dave Kubien, University of New Brunswick, USA

"There is a clear connection between the pedagogical approach of the textbook and the assessment materials." - Sonja Pyott, University of North Carolina Wilmington, USA

James R. Morris is Associate Professor in the Biology Department at Brandeis University. He teaches a wide variety of courses for majors and non-majors in evolution, genetics, genomics, anatomy, and health sciences. In addition, he teaches a first-year seminar focusing on Darwin's On the Origin of Species. He is the recipient of numerous teaching awards from Harvard and Brandeis. His research focuses on the rapidly growing field of epigenetics, making use of the fruit fly Drosophila melanogaster as a model organism. He currently pursues this research with undergraduates in order to give them the opportunity to do genuine, laboratory-based research early in their scientific careers. Dr. Morris received a Ph.D. in genetics from Harvard University and an M.D. from Harvard Medical School. In addition, he was a Junior Fellow in the Society of Fellows at Harvard University, gave talks to the public on current science at the Museum of Science in Boston, and works on promoting public understanding of personal genetics and genomics.

Daniel L. Hartl is the Higgins Professor of Biology in the Department of Organismic and Evolutionary Biology at Harvard University. He has taught highly popular courses in genetics and evolution at the introductory and advanced levels. His lab studies molecular evolutionary genetics and population genetics and genomics. Dr. Hartl is the recipient of the Samuel Weiner Outstanding Scholar Award and the Medal of the Stazione Zoologica Anton Dohm Naples. He is a member of the National Academy of Sciences and the American Academy of Arts and Sciences. He has served as President of the Genetics Society of America and President of the Society for Molecular Biology and Evolution. Dr. Hartl's Ph.D. was awarded by the University of Wisconsin, and he did post-doctoral studies at the University of California, Berkeley. Prior to joining the Harvard faculty, he served on the faculties of the University of Minnesota, Purdue University, and Washington University Medical School. In addition to publishing more than 350 scientific articles, Dr. Hartl has authored or coauthored 30 books.

Andrew H. Knoll is the Fisher Professor of Natural History in the Department of Organismic and Evolutionary Biology at Harvard University. He is also Professor of Earth and Planetary Sciences. Dr. Knoll teaches introductory courses in both departments. His research focuses on the early evolution of life, Precambrian environmental history, and the interconnections between the two. He has also worked extensively on the early evolution of animals, mass extinction, and plant evolution. He currently serves on the science team for NASA's mission to Mars. Dr. Knoll received the Phi Beta Kappa Book Award in Science for Life on a Young Planet. Other honors include the Paleontological Society Medal and Wollaston Medal of the Geological Society, London. He is a member of the National Academy of Sciences, the American Academy of Arts and Sciences, and the American Philosophical Society. He received his Ph.D from Harvard University and then taught at Oberlin College before returning to Harvard.

Robert A. Lue is Professor in the Department of Molecular and Cellular Biology and Director of Life Science Education at Harvard University. He regularly teaches in Harvard's first-year Life Sciences program and upper-level courses in cell biology. He has a longstanding commitment to interdisciplinary teaching and research, and chaired the faculty committee that developed an integrated science course to serve multiple science majors and premedical students. Dr. Lue has also developed award-winning multimedia, including the animation 'The Inner Life of the Cell.' He has coauthored undergraduate biology textbooks and chaired education conferences on college biology for the National Academies and the National Science Foundation, and diversity in science for the Howard Hughes Medical Institute and the National Institutes of Health. He also founded and directs a Harvard life sciences outreach program that serves over fifty high schools. He received his Ph.D. from Harvard University.

Andrew Berry is Lecturer in the Department of Organismic and Evolutionary Biology and an undergraduate advisor in the Life Sciences at Harvard University. He teaches in Harvard's first-year Life Sciences program, as well as courses on evolution and Darwin. His research interests are in evolutionary biology and the history of science. He has coauthored two books: Infinite Tropics, a collection of the writings of Alfred Russel Wallace, and DNA: The Secret of Life, which is part history, part exploration of the controversies swirling around DNA-based technology.

Andrew Biewener is the Charles P. Lyman Professor of Biology in the Department of Organismic and Evolutionary Biology at Harvard University, and Director of the Concord Field Station. He teaches introductory and advanced courses in anatomy, physiology, and biomechanics. His research focuses on the comparative biomechanics and neuromuscular control of mammalian and avian locomotion, with relevance to biorobotics. He is currently Deputy Editor-in-Chief for the Journal of Experimental Biology. He also served as President of the American Society of Biomechanics.

Brian D. Farrell is Professor of Biology in the Department of Organismic and Evolutionary Biology at Harvard University, and Curator of Entomology in the Museum of Comparative Zoology. He has collaborated with Los Niños de Leonardo y Meredith in the Dominican Republic to teach children about native insects, and participates in an All Taxa Biodiversity Inventory of the Boston Harbor Islands national park area. His research focuses on the interplay of adaption and historical contingency in species diversification, particularly beetles.

Naomi Pierce is the Hessel Professor of Biology in the Department of Organismic and Evolutionary Biology at Harvard University, and Curator of Lepidoptera in the Museum of Comparative Zoology. She teaches and studies animal behavior and behavioral ecology. Her lab focuses on the ecology of species interactions, such as insect-host plant associations, and on the life history evolution and systematics of Lepidoptera. She has also been involved in reconstructing the evolutionary 'tree of life' of insects such as ants, bees, butterflies.

Alain Viel is the Director of Undergraduate Research and Senior Lecturer in the Department of Molecular and Cellular Biology at Harvard University. He teaches research-based courses, as well as courses in molecular biology and biochemistry. He is a founding member of Biovisions, which focuses on science visualization. Dr. Viel worked with his colleague and Biology: How Life Works coauthor Robert Lue on the animation 'The Inner Life of the Cell.'