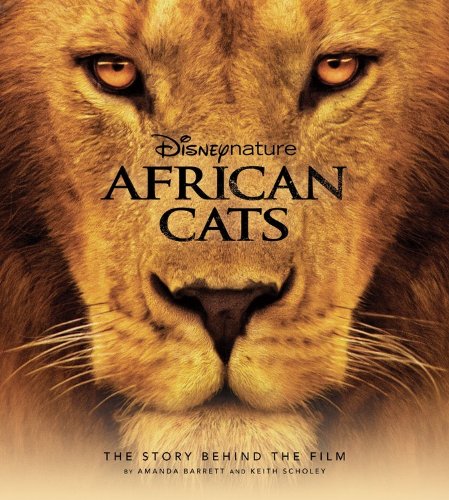 The film African Cats (2011) takes place in the heart of Africa, the Maasai Mara Game Reserve, where in place of justice and fairness, raw power rules the day. Lions, cheetahs, elephants, giraffes, buffalo, gazelles and other large mammals roam the vast, rolling plains of the reserve and with so many species competing for space and food, the stakes are high, and danger looms at every turn. AFRICAN CATS is a comprehensive guide to the film, filled with stunning photography and real insight into the process behind the scenes.

Keith ScholeyKeith Scholey began his career in television and film working as a researcher for the BBC Natural History Unit, where he then became a producer of the "Natural World" and "Wildlife on One" series as well as special series including the award-winning The Private Life of Plants. In 2002, Scholey was appointed Controller of Specialist Factual, responsible for BBC Natural History, Science, History, Arts, Business and Religious in-house productions. Natural History productions made during this time included Springwatch, David Attenborough's Life in the Undergrowth and Planet Earth. In 2006, Scholey was named the Controller of Factual Production, and he is currently responsible for all in-house Factual television production across England in the BBC. He is also the Deputy Chief Creative Officer for Vision Productions. Awards for productions he has been responsible for include Emmies, Baftas, RTS's, Wildscreen pandas and Jackson Hole Awards. Amanda BarrettGrowing up with an interest in environmental politics and conservation, Amanda joined the BBC's Natural History Unit where she became an assistant producer on Owen Newman's Arctic fox film for the BBC's recurring series, "The Natural World." Since then, Barrett and Newman have made numerous films together in diverse countries such as Australia, Brazil, Namibia, Kenya, Tanzania, and Zambia. Barrett has written articles for BBC Wildlife and been a principal contributor to several successful books to accompany BBC series such as "Wild Africa" and "Nature's Great Events." In 2002, the script she wrote for Cats under Serengeti Stars won "Best Script" at the Wildlife International Film Festival.

5. Disney Nature: African Cats: The Story Behind the Film