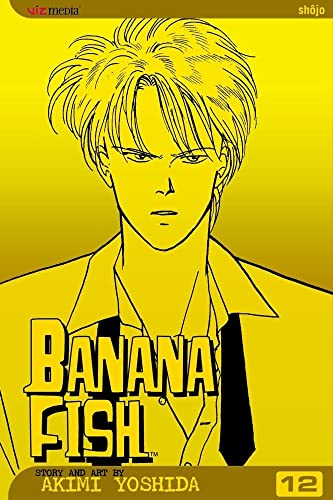 VICE CITY: NEW YORK IN THE 80s... Nature made Ash Lynx beautiful; nurture made him a cold ruthless killer. A child runaway brought up as the adopted heir, hatchet man, and sex toy of "Papa" Dino Golzine, the East Coast's Corsican crime lord, Ash is now at the rebellious age of seventeen - forsaking the kingdom of power and riches held out by the devil who raised him, preferring a code he can live with among a small but loyal gang of street thugs. But his "Papa" can't simply let him go - not when the hideous secret that drove Ash's older brother mad in Vietnam has suddenly fallen into his insatiably ambitious hands. It's exactly the wrong time for Eiji Okamura, a pure-hearted young photographer from Japan, to arrive in NYC and make Ash Lynx's acquaintance... and fall with him into the bloody whirlpool of pride, greed, lust and wrath unleashed by the enigma code-named Banana Fish...

Epic in scope, and one of the best-selling shojo titles of all time in Japan, Akimi Yoshida put an electric shock into the genre and gained a huge crossover audience through Banana Fish's stripped-down, non-stop style

Akimi Yoshida made her manga debut in 1977 with the college manga story her college story, A SLIGHTLY STRANGE NEIGHBOR. Her immensely popular series BANANA FISH, her longest work to date, ran from 1985 to 1994 and made her a superstar in the shojo manga world, injecting a new realism and narrative energy into the genre and attracting a large male crossover readership. Yoshida was honored twice with the top annual prize for excellence in shojo from Japanese publishing giant, Shogakukan.