Items related to The Works of Thomas Hood: Comic and Serious in Prose...

Thomas Hood The Works of Thomas Hood: Comic and Serious in Prose and Verse With All the Original Illustrations Part Five

The Works of Thomas Hood: Comic and Serious in Prose and Verse With All the Original Illustrations Part Five 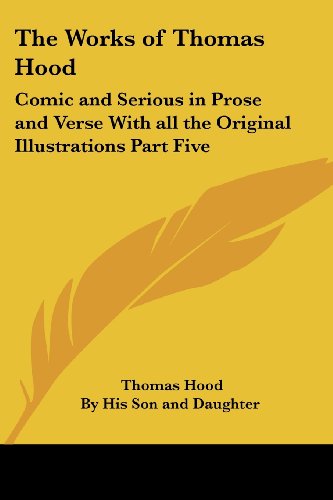 1871. Volume Five of Ten. Hood, English poet and editor of various prominent magazines and periodicals, is chiefly remembered for his humorous work (including Miss Kilmansegg, which appeared in the New Monthly Magazine). However, Hood wrote a number of serious poems for which he is also known including: the popular Song of the Shirt (published anonymously in Punch in 1843, which became a call to arms for workers protesting against industrial exploitation); The Bridge of Sighs; The Haunted House; The Elm Tree; The Plea of the Midsummer Fairies; and shorter pieces such as The Deathbed. This volume contains Hood's writings from 1824 to 1828. See other titles by this author available from Kessinger Publishing.