Items related to Freedom: Over the Oceans, Other Side of the Mountains:...

Brown, Shirin Freedom: Over the Oceans, Other Side of the Mountains: An Emotional True Story of a Courageous Iranian Woman

Freedom: Over the Oceans, Other Side of the Mountains: An Emotional True Story of a Courageous Iranian Woman 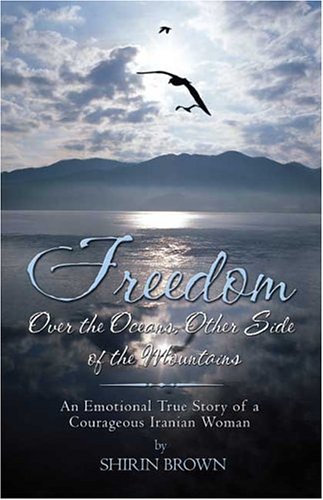 This is a cruise deep through the heart and soul of a brave young woman born to a privileged Iranian family in the 40s, when convention forces her into a loveless and brutal marriage. Divorce is not an option, as her vengeful husband threatens: aLeave, and youall never see the children again.a To prove his word, he kidnaps her baby boy. He has all the rights to do so, as the law clears: here, children belong to their father. So, she devises a clever plot to win the custody of her two young children. However, since divorce is considered immoral for Iranian women, and her ex husband still does not leave them in peace, they escape from him to Austria.But after five years, due to awkward domestic conditions in Austria, they would have to leave and start anew in West Africa. One year later, another new start in Englandauntil they reach San Diego, California.

1. Freedom: Over the Oceans, Other Side of the Mountains: An emotional true story of a courageous Iranian Woman

Book Description PublishAmerica. Paperback. Condition: GOOD. Spine creases, wear to binding and pages from reading. May contain limited notes, underlining or highlighting that does affect the text. Possible ex library copy, will have the markings and stickers associated from the library. Accessories such as CD, codes, toys, may not be included. Seller Inventory # 3143350693