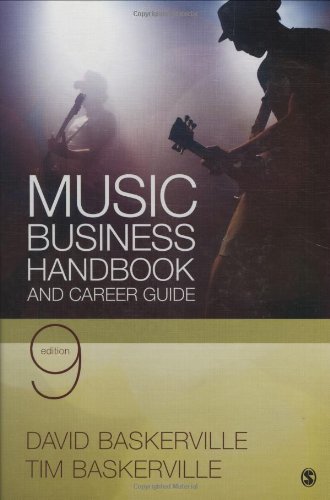 With a breadth of coverage unrivalled by any other resource available, the Ninth Edition of the Music Business Handbook and Career Guide maintains the tradition of this classic text as the most comprehensive, up-to-date guide to the music industry.

"This book is the ultimate go-to handbook for anyone considering a career in music." (Geoffrey F. Howe )

"This is the standard text in my music business program." (James Payne )

Editor Tim Baskerville has a diverse background in entertainment and media. He began his career in broadcasting after receiving a B.A. in theater arts from UCLA. Early affiliations included CBS and Cox Broadcasting, where he served as a writer-producer. The first TV documentary he created for CBS stations was nominated for an Emmy. As a publisher and entrepreneur, he launched business periodicals on the home video software industry, global film distribution, and multinational broadcasting. Today, a publishing company he founded in London in the 1990s is one of the world’s leading providers of data on mobile entertainment (www.informamedia.com). In recent years he served as President of Kagan Research, the leading provider of financial analysis on the media industry, and CEO of JupiterResearch, a key source of consumer research on Web behavior. As a consultant, Baskerville’s clients have included the Motion Picture Association of America, Variety, Time Warner, IBM, International Data Corp., Young & Rubicam, JVC America, Apple, and The Rockefeller Foundation. He has been both a strategy consultant and weekly columnist for Billboard. Baskerville was Vice President of the Music and Entertainment Industry Educators Association (MEIEA), member of the Writers Guild of America, west, and chapter founder of the Overseas Press Club of America.