Items related to Values and Ethics in Social Work: An Introduction

Values and Ethics in Social Work: An Introduction 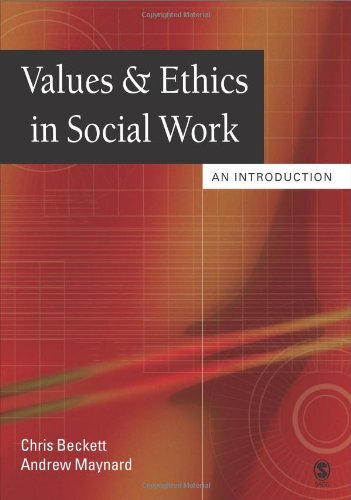 `This introductory text succeeds in providing an accessible introduction to the subject area. The book is consistently structured, well planned and uniformly written in a conversational and immediate style.... The discussion manages to combine a sense of engagement with a balanced treatment of the issues. Readers who apply themselves will be well sensitised to the matters under discussion and should be able to take their understanding into the practical arena' - Chris Clark, University of Edinburgh

In social work there is seldom an uncontroversial `right way' of doing things. So how will you deal with the value questions and ethical dilemmas that you will be faced with as a professional social worker?

This lively and readable introductory text is designed to equip students with a sound understanding of the principles of values and ethics which no social worker should be without. Bridging the gap between theory and practice, this book successfully explores the complexities of ethical issues, while recognising the real-world context in which social workers operate.

Key features of the text include:

- Full of hands-on advice and tips for professional practice.

- Satisfies all the curriculum and training requirements for the new social work degree.

Mapping directly on to first year courses, this text is essential reading for all social work undergraduates. It is an ideal refresher text for upper-level undergraduates, postgraduate and post-qualifying students, and for professionals.

"This book is a worthy addition to the literature, and anyone who is engaged in educating students regarding values and ethics would likely find it useful. This text is successful at "starting where the student is" when entering into the often charged territory of values. Backett and Maynard have understood clearly that students often need more guidance in examining their own values and assumptions, and how these lead us to very different ways of thinking about ethical dilemmas. It would be a helpful resource in approaching the teaching of values and ethics in social work." (Suzanne Bushfield The Journal of Contemporary Social Services 2006-08-07)

He moved into academic social work in 2000, working first at Anglia Ruskin University in Cambridge and then at the University of East Anglia in Norwich.  In addition to his social work text books, he has published academic articles on a variety of topics including the use of military language in social work, the importance of realism as an ethical principle, and statistics from Sweden about child abuse, following the legal ban there on corporal punishment.  His main research area, however, has been decision-making in court proceedings about children, and decision-making about children more generally.

Chris has a parallel career as a writer of literary science fiction. (More information about his fiction can be found at www.chris-beckett.com.)  He won the Edge Hill Short Fiction prize for his story collection, The Turing Test, and the Arthur C. Clarke award for his novel Dark Eden.   He is now a full-time writer.     His view is that ‘academic’ and ‘creative’ writing have more in common than might at first sight appear: in both cases the author begins with a jumble of ideas that seem to him to be in some way linked together, and attempts, in large part by a combination of intuition and trial and error, to impose some shape and structure.

Chris has three adult children, and lives in Cambridge with his wife Maggie and sundry animals.

2. Values and Ethics in Social Work