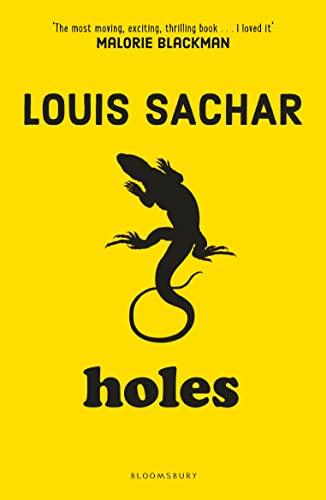 Stanley Yelnats' family has a history of bad luck, so when a miscarriage of justice sends him to Camp Green Lake Juvenile Detention Centre (which isn't green and doesn't have a lake) he is not surprised. Every day he and the other inmates are told to dig a hole, five foot wide by five foot deep, reporting anything they find. The evil warden claims that it is character building, but this is a lie and Stanley must dig up the truth.

Wonderfully inventive, compelling and hilarious, Louis Sachar has created a masterpiece. This multi-million bestseller now in an exciting new package ahead of the publication of Sachar's newest 9-11 fiction title Fuzzy Mud (publishing August 2015)

'Holes is one of those instant classics that adults, as well as children over eight, will thoroughly enjoy. Sachar has created something quite different from JK Rowling or Philip Pullman, but no less enchanting' (Independent on Sunday)

'If you want a witty, moving read that grabs you and never lets up, look no further than Holes' (The Daily Telegraph)

Forget the fame and glamour of Holes, the movie and the rest. Just remember Camp Green Lake and that story that gave us one of the best books of the last ten years (Books for Keeps)

Book Description Paperback. Condition: New. Language: English. Brand new Book. WINNER OF THE NEWBERY MEDAL WINNER OF THE NATIONAL BOOK AWARDSELECTED AS ONE OF TIME MAGAZINE'S 100 BEST YA BOOKS OF ALL TIME Stanley Yelnats' family has a history of bad luck, so when a miscarriage of justice sends him to Camp Green Lake Juvenile Detention Centre (which isn't green and doesn't have a lake) he is not surprised. Every day he and the other inmates are told to dig a hole, five foot wide by five foot deep, reporting anything they find. Why? The evil warden claims that it's character building, but this is a lie. It's up to Stanley to dig up the truth. Witty, inventive and completely unique, this is a masterpiece of storytelling that combines sly humour with irresistible, page-turning writing. Seller Inventory # LIB9781408865231