Items related to The Song of Achilles (High/Low)

The Song of Achilles (High/Low) 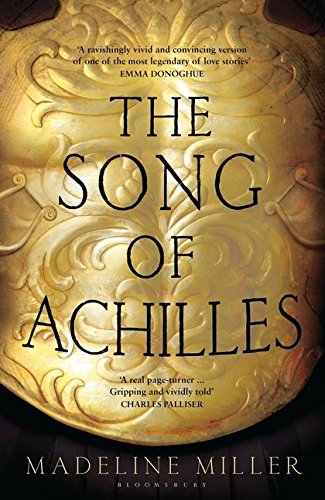 Greece in the age of Heroes. Patroclus, an awkward young prince, has been exiled to the kingdom of Phthia. Here he is nobody, just another unwanted boy living in the shadow of King Peleus and his golden son, Achilles.

Achilles, 'best of all the Greeks', is everything Patroclus is not - strong, beautiful, the child of a goddess - and by all rights their paths should never cross. Yet one day, Achilles takes the shamed prince under his wing and soon their tentative companionship gives way to a steadfast friendship. As they grow into young men skilled in the arts of war and medicine, their bond blossoms into something far deeper - despite the displeasure of Achilles's mother Thetis, a cruel and deathly pale sea goddess with a hatred of mortals.

Fate is never far from the heels of Achilles. When word comes that Helen of Sparta has been kidnapped, the men of Greece are called upon to lay siege to Troy in her name. Seduced by the promise of a glorious destiny, Achilles joins their cause, Torn between love and fear for his friend, Patroclus follows Achilles into war, little knowing that the years that follow will test everything they have learned, everything they hold dear. And that, before he is ready, he will be forced to surrender his friend to the hands of Fate.

Profoundly moving and breathtakingly original, this rendering of the epic Trojan War is a dazzling feat of the imagination, a devastating love story, and an almighty battle between gods and kings, peace and glory, immortal fame and the human heart.

A captivating retelling of the Iliad and events leading up to it through the point of view of Patroclus: it's a hard book to put down, and any classicist will be enthralled by her characterisation of the goddess Thetis, which carries the true savagery and chill of antiquity (Donna Tartt The Times Christmas Books)

Mary Renault lives again! A ravishingly vivid and convincing version of one of the most legendary of love stories (Emma Donoghue, author of number one bestseller, Room)

Original, clever, and in a class of its own ... an incredibly compelling and seductive read (Independent on Sunday)

Extraordinary ... Beautifully descriptive and heart-achingly lyrical, this is a love story as sensitive and intuitive as any you will find (Daily Mail)

If I were to give a prize for the best work of fiction I've read this year, this would be the runaway winner. As a first novel, it heralds the arrival of a major new talent (A.N. Wilson Reader's Digest)

A retelling of The Iliad with entertaining and joyful exuberance ... You may know the story but you've never heard it told like this. A gem (Stylist)

You'll know the name Achilles. But do you know who he was? This novel will tell you his wonderful story in a wonderful way (Joanna Trollope Stylist)

LONGLISTED FOR THE ORANGE PRIZE FOR FICTION 2012. A breathtakingly original rendering of the Trojan War - a devastating love story and a tale of gods and kings, immortal fame and the human heart

1. The Song of Achilles

Book Description Hardcover. Condition: Good. Ex library copy with usual stamps/stickers Good condition is defined as: a copy that has been read but remains in clean condition. All of the pages are intact and the cover is intact and the spine may show signs of wear. The book may have minor markings which are not specifically mentioned. Most items will be dispatched the same or the next working day. Seller Inventory # wbb0017736499

Book Description Condition: Good. A+ Customer service! Satisfaction Guaranteed! Book is in Used-Good condition. Pages and cover are clean and intact. Used items may not include supplementary materials such as CDs or access codes. May show signs of minor shelf wear and contain limited notes and highlighting. Seller Inventory # 1408816032-2-4

Book Description Hardcover. Condition: Fine. Dust Jacket Condition: Fine. 1st Edition. Black Boards with lettering to spine. Firm binding and clean pages. Jacket is not price clipped. Signed and inscribed by the author on the title page. 'For Alex, thank you for being one of my first readers'. Professional seller. All pictures are of the actual book that is for sale. Books are dispatched in cardboard packaging and dust jackets are placed in removable protective covers. Signed by Author(s). Seller Inventory # 10560

Book Description Hard Cover. Condition: Fine. Dust Jacket Condition: Fine. 1st Edition. Black Boards with lettering to spine. Firm binding and clean pages. Jacket is not price clipped. Signed by the author on the title page. First print with the full publishers numberline. Professional seller. All pictures are of the actual book that is for sale. Books are dispatched in cardboard packaging and dust jackets are placed in removable protective covers. Signed By Author. Seller Inventory # 12136